Think Less, Fierce More: Or, The Gayest Weekend Ever

“I’ve never been to a gay bar in Manhattan,” SC, my gay husband, said. Visiting from the not-as-gay city of Boston for two weeks, I made it my mission to make all his New York dreams come true. I would accompany him to whatever gay bar(s) he chose, but neither he or I knew any and he asked a friend. What’s funny, though, is that even though this was NYC Pride weekend in New York, this would really just be a typical night out for me as a proud hag.
We wound up in the East Village, at a place called The Cock. A bright red neon rooster hung subtly outside of it, black doors locked until 11pm. Not wanting to be ‘those people’ who showed up at the gay bar right when it opened, we had some cocktails elsewhere then eventually made our way over with a gaggle of boys we knew. Inside, giant signs condemned sex on the premises and warned against pickpockets. Lights above swirled red in the blackness and men in jockstraps danced on the bar, bare bottoms displayed to the gathering crowd inside. While most of the men stood there, either looking at the dancers or at each other, I danced to the actually really great playlist inside: Deee-Lite, Donna Summer, etc. Werk. SC, who is in a loving, long-term relationship with another boy, danced with me. We drank drinks and fended off men (from both of us, strangely enough). At one point I asked one of the jockstrapped dancers if I could dance on the bar with them, but he responded, rather politely, “No, sorry, sweetie.” I bet the ladies who come to the bar ask them that a lot (though I think I was one of two in there at the time).
A bit later, I had to use the bathroom, but there were no stalls. “Where is there a place for us gals to go?” I asked the lady bouncer. “Ah, right next door dahling,” she said in a thick Irish accent. “At Urge their bathrooms are even nicer than ours!” I made my way over to Urge, which I found out was also a gay bar. Sneaking past the man asking for cover, I dashed past the boys dancing on poles in tiny underwear and even more jockstraps to the unisex bathroom. Whew!
--
Also this weekend, I had the pleasure of photographing a gay wedding in Fort Tryon Park. I imagined informal acquaintances of the grooms asking them what they did for Pride, both of them responding casually, “Oh, nothing, we just had a gay wedding.” If such a situation did in fact happen, it would be the best answer ever. All of their family and friends gathered in support of their love, and it was so beautiful to feel the support for their loved ones.
It was a casual chic wedding, none of that cheesy two-grooms-on-a-cake thing. Children waved rainbow flags, and we all wore Marriage Equality bracelets. A perfect addition to Pride weekend.
--
Last but certainly not least, though, was the actual Pride parade. Having missed out on it last year, I was determined to go and take some pictures this year. My partner in crime for all things gay, AS, and I made our way to the crazily barricaded West Village. Thinking we would be able to stand at the parade’s end without a crowd we made our way to the Stonewall Inn, but HAHAHAHA we were mistaken. We instead wound our way to the very, very end, at Christopher and Greenwich, where it was still packed but we were able to see all the fabulousness. Drag queens, gay nudists, gay Jews, gay Peruvians, gay cowboys, self-proclaimed ‘Lord Lovin’ Lesbians’, and just families showing their support for one another. In AS’s brilliant words, “Everybody’s gay today.” It certainly had the best soundtrack of any parade I’ve been to since I’ve been in New York, and there was fierceness abound, not just of body but of soul. The fantastic Gay Men’s Health Crisis, the first organization created in response to the AIDS crisis in the early ‘80s, marched out strong in bright pink, as did organizations of all flavors, shapes and sizes. The crowd was out in full fierce (pun intended), too. It's actually the first parade I've been to in New York that I would definitely go back to. Even as a straight lady I felt proud to be there in full support of everyone to love whomever they choose. I could go on and on, but the pictures below will have to suffice :) 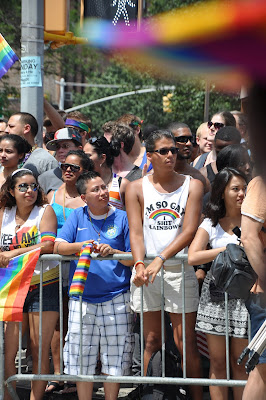 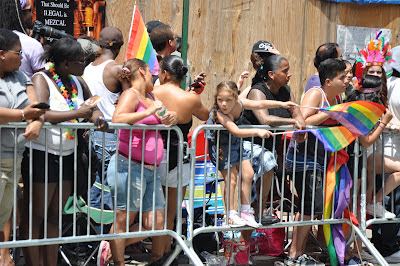 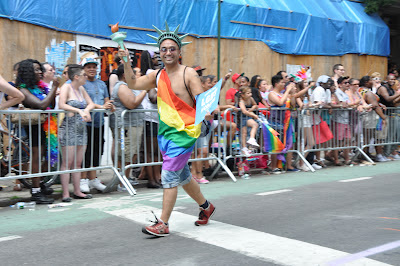 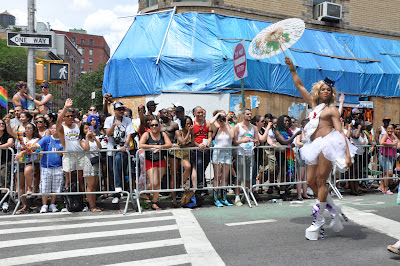 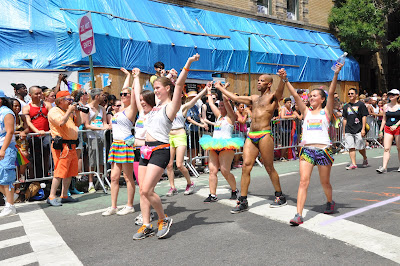 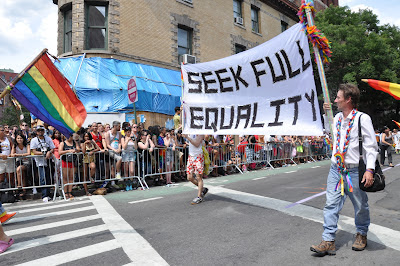 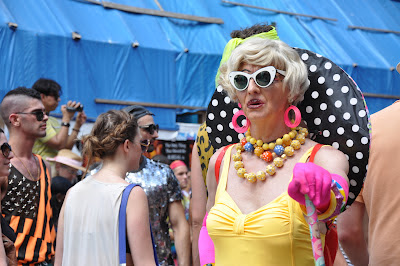 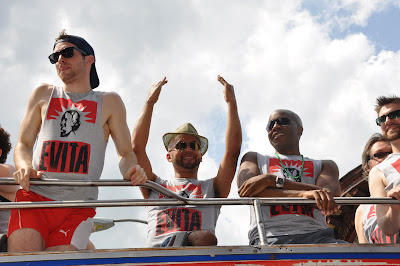 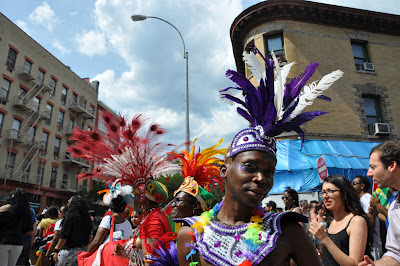 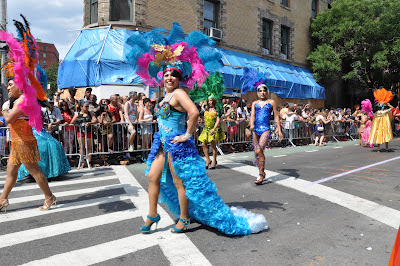 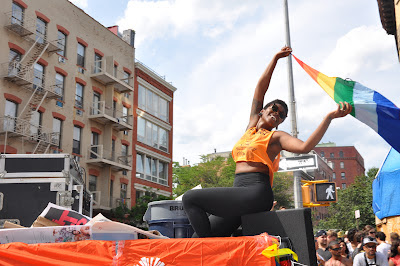 Posted by miss-manhattan at 12:28 AM No comments: