Top Great Moments I Didn't Write About But Should Have: 2014 Edition

For whatever reason, there are some great moments that slip through the cracks every year--ones that didn't get their due being chronicled as really rad experiences. As I do every year, here are some of the great moments of 2014 that didn't make it to the blog during the year, so I'm kicking off this new year with them! For previous incarnations of this list, please see the 2013 and 2012 editions. Happy new year, folks! May 2015 bring you only success, health, and happiness.


Ghoster's Paradise
So technically this is a 2013 event, but it was released in 2014 so I'm counting it! "Ghoster's Paradise," (watch below!) written by inimitable comedy writer Hannah VanderPoel and directed by Michael Schwartz is, as perhaps you can tell, a parody video of Coolio's 1995 classic "Gangster's Paradise."It was written to hilariously call attention to and publicly shame the infinite men (and women!) all over this fine nation of ours who have resorted to "ghosting," or repeatedly telling someone you're interested and then disappearing without having the guts to say you're just not into them. Hannah is a friend of RaGo and I, and back in 2013 she asked us and a bunch of other rad ladies to take part in the video as members of a badass lady gang. On a Sunday afternoon in October 2013, we put on our finest attempts at faux hip-hop inspired apparel and stomped all over a rooftop in Bushwick. When the video was released in March 2014, it went viral, getting picked up by the likes of The Huffington Post and Glamour. I even had people I hadn't spoken to in years writing to me saying how much they loved it and how (sadly!) accurate it was. I didn't write about it that October because I wanted to wait until it was released, but it turns out I was preoccupied at that time as well. So I just did! It was a truly rad experience to be a part of, so thank you so much Hannah for that!

Women's Herstory Exhibition
I met photographer Elaine Hargrove when I was working with an arts collaborative awhile ago. I was instantly taken with her colorful documentary and portraiture work, which I wrote about on my blog. She loved the piece and sent me a photograph of hers to say thank you, and I now proudly display it in my house. When she was assembling a women's only photography exhibition earlier this year, she was kind enough to include me, too. Held at Freecandy in Brooklyn, the exhibition was called the "Women's Herstory Exhibition," in honor of women's history month and featured a variety of performance art throughout the evening alongside the gallery exhibition. SO many people came out to the event, and it was an honor to be included in such a rad collection of ladies.


Restaurants: Adrienne's Pizzabar (Financial District) and Fish (West Village)
My freshman year of college cured me from ever really seeking out a slice of pizza for enjoyment--pizza is everywhere when you're in college, and it really took the novelty out of the food for me, to the extent that I hardly ever eat it now. But on a Saturday evening after a concert at the South Street Seaport, HanOre and I were hungry. She recommended Adrienne's Pizzabar, maybe a 15-20 minute walk away on one of the Financial District's historic cobblestone streets. I was nervous we'd be swarmed by de-suited finance guys on the prowl, but I trusted her judgment. The bistro-style atmosphere, complete with candlelight and a long wooden cocktail bar, was not what I expected in a place to get a slice, but I'd soon find out none of that mattered. We shared a grilled chicken and mushroom pizza (they don't do slices), and I swear on my red heels it was the absolute best pizza I've ever had in my life. If I had known pizza could have tasted like this, I would have been eating it as often as humanly possible. I can still taste it as I write this some six months later. When can we go back?

Fish is actually a restaurant Maw Manhattan found before she and Paw Manhattan came to visit in September. My parents are not picky eaters, per se, but they just don't like a complicated menu--any kind of food that would require the suffix "infusion," for example. Finding restaurants to take them to is often nervewracking for me--it takes a long time and I really hate disappointing them when they've traveled so far to have a nice meal. In September I reached the end of my rope, and I said, okay, it's your turn to find something! And Fish it was. Fish is, of course, a seafood restaurant, and it's super low-key, with waiters wearing t-shirts and a funky, grungy atmosphere. It was a fun, welcome change from another place where I have to wear heels to dinner. The food was both affordable and delicious--lobster bisque served in a mug, lobster mac and cheese, lobster pot pie...my mouth is watering just thinking about it. Everything each of us ordered that night was absolutely delicious, and I highly recommend it.


Lancaster
In August, I had the privilege of working on a story out in Lancaster, Pennsylvania. TL and I traveled out to the city, his hometown, together. Though the story itself ended up taking a different direction while we were there, in the meantime I got to see his favorite spots all over the city and experience this place that was so important to my friend. Lancaster is not just Amish country. It's small but vibrant, an almost-startling mix between a funky city like Austin--bursting with galleries and music venues all in a small radius-- and lush, green farmland. Not to mention, it's wonderfully, wildly inexpensive (beers for $1.75, glasses of milk for 50 cents at the Farmer's Market, 40 cent wings). I saw beautiful, candy-colored sunsets, I sat in a backyard overlooking someone's farm in the cool summer breeze, I got stuck in traffic behind an Amish buggy. It was easily my favorite trip this year, if not one of my favorite experiences the entire year. I have been working on an essay about my trip there since I left, pretty much, and hopefully one day it'll be good enough to match the memory of my trip there. Infinite thanks to TL for dragging me around, helping me with this story, putting me up in his home, and sharing his city with me. 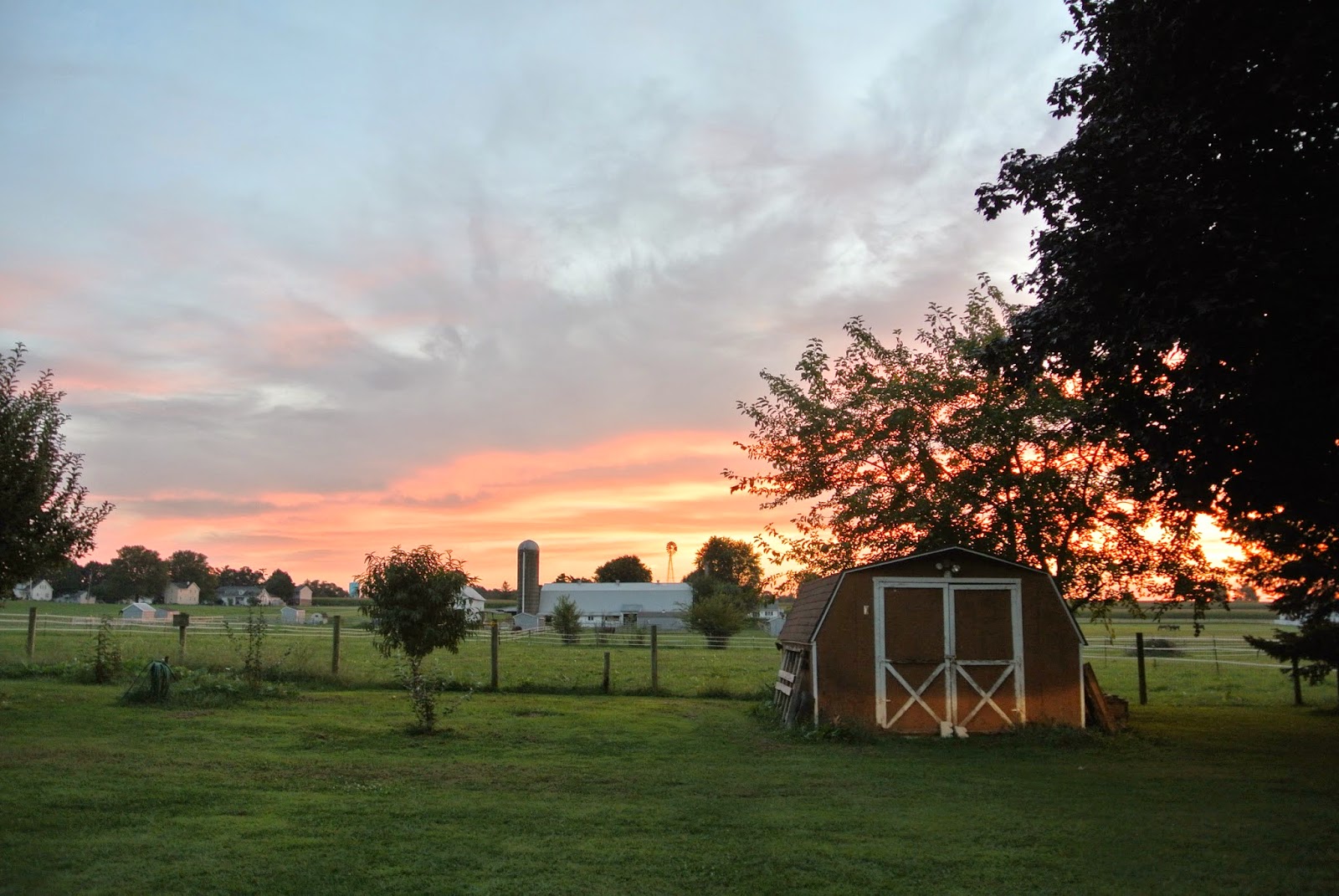 Apple Picking
HVP's birthday wish was for a bunch of friends to go apple picking in upstate New York, preferably wearing flannel attire if possible. So we went, flannel and all! On a late September morning, we piled into a van and drove two hours north to Warwick, NY, where there's an apple orchard. To get there, we passed by tons of brightly colored leaves in the midst of changing. Sometimes in New York, whe you're pounding the pavement, you forget completely about seeing the changing seasons, so it was nice to see. There were tons of people at the orchard--apparently this is a popular activity?--and we poked through the trees to get our haul. Not before sampling the orchard's wines and ciders and partaking in a barbeque lunch, of course! The trip was lovely not only for the activity itself but for HVP's lovely friends who made me laugh the entire way, RaGo and her Britney Spears solo sing-alongs included. 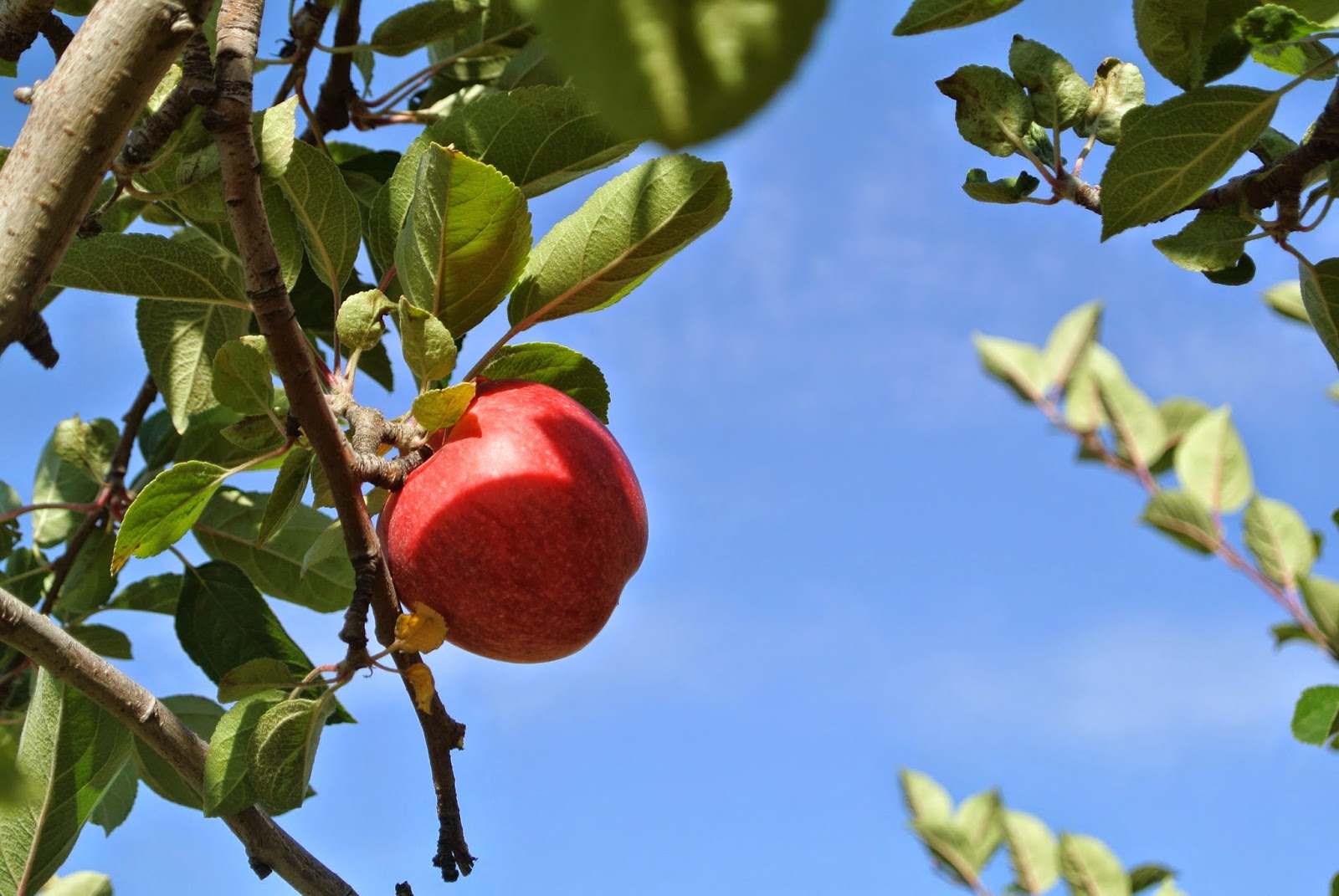 Jerseyween
There had been an email chain going for months about what we would do for Halloween. For just as long, I had been preparing my costume, to be Andy Warhol's "Gold Marilyn Monroe" from 1962. I was determined to go out and get it seen, too! We wound up at SA's place in Jersey City, which is a lot less far from Manhattan than I originally anticipated--it's more like the sixth borough in that it took me about as long to get there as it does to get to Brooklyn. I will fully admit, I was not sold on the idea of "Jerseyween," as it became known, when our email chain first started. "Ughhhhhhh whyyyyyy do we have to leave the staaaaaaaate???" I found myself thinking as messages progressed toward a New Jersey evening. But it was lovely! Downtown Jersey City is kind of homey and approachable in the way that the tall glass buildings in Manhattan and the hipsterfied streets in Brooklyn can't be. We got into costume--me as Warhol's Marilyn, alongside Dr. Who, a Vulcan from Star Trek, and living incarnations of Firefox and Internet Explorer--and headed over to meet up with some other friends--Bob Ross and his Happy Tree-- for probably the most candy and junk food I've eaten on Halloween since I was in elementary school. We made our way after that to a Barcade location close by. After a number of photos and drinks there, we came back to SA's to de-makeup and fall asleep while watching Shaun of the Dead. It was easily the best Halloween I've had since coming to New York. 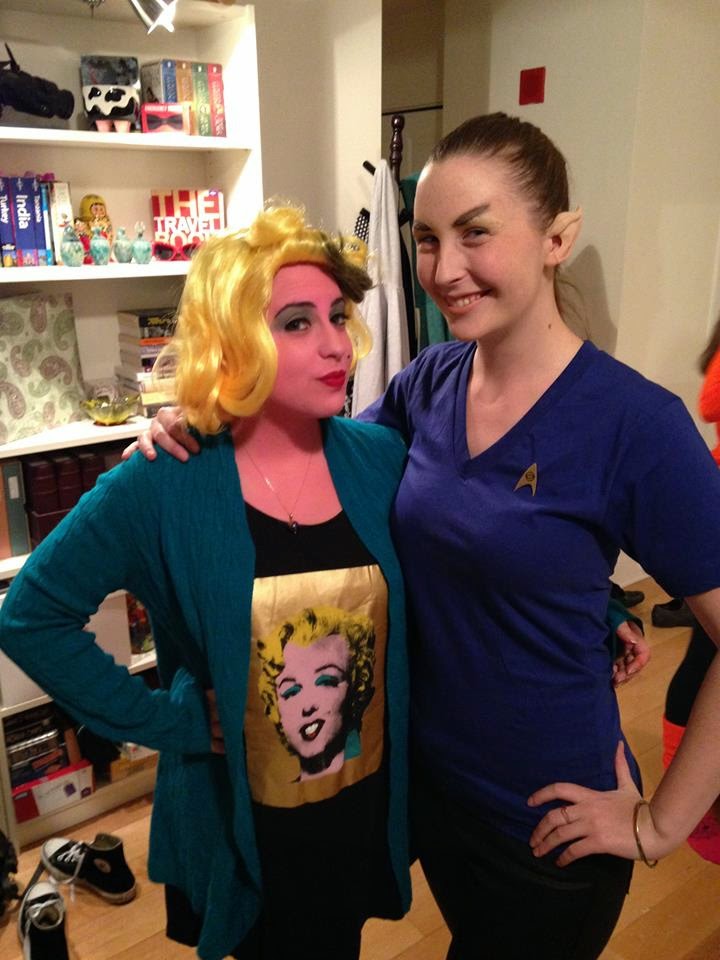 
Ladydate
I was fortunate enough to receive two tickets to see Les Ballets Trockadero de Monte Carlo, a hilarious drag ballet company (yes, that means men in drag on pointe shoes!) and HanOre came with me. The Trocks, as they're known have been in existence for 40 years, with rotating cast of dancers who have impeccable ballet backgrounds and, of course, comedic timing. HanOre and I decided to make a gal's night of it, starting with a trip to La Maison du Croque Monsieur on University Place. La Maison is located in the building that was once home to writer Anaïs Nin, and each sandwich on the menu is named for one of her lovers (Hugh, Otto, Eduardo, Antonin, etc...). Post-Trocks, wound our way to the fabulous Beatrice Inn, whose dark wooden bar and white tiled walls are below street level. We sat near the fireplace drinking martinis. Then another of HanOre's tried-and-true college bars and, followed it with a late-night snack at the wonderful Pommes Frites in the East Village. I love the feeling of a full evening, falling into a cab on the way home knowing you had a fantastic night.

Posted by miss-manhattan at 4:18 PM No comments: