In light of the miserable New York weather this week, I am going to post one last blog about California. It has been almost a month since I’ve seen a sunset or left the house without wearing socks. I hate wearing socks.


I only had to wear socks a little bit in California, though. On Saturday, when KL picked me up at the hotel, I had actually overdressed for the weather, my cardigan and leather jacket too much for the 70-some-odd degree weather. It had been three days and I still didn’t know how to dress for the city. No matter. KL had been kind enough to take me out to fulfill one of my life goals: putting my hands in Marilyn Monroe’s handprints in front of Grauman’s Chinese Theatre. Now I’m fully aware of my anti-tourist demagoguery, but this was a special occasion! And Grauman’s is much smaller in person than the sprawling postcards on which it usually appears. But tucked neatly to the left side of the entrance, there she was. There’s a big glass bead on the ‘i’ in Marilyn because she hoped the studio would let her leave a diamond in there. Fearing it would get stolen, they let her put a rhinestone instead…which, in a matter of days, was itself stolen. So they put in a glass bead to fill the place, and it’s been there for 60 some-odd years now. There were other celebrity signatures there, but I didn’t really care, nor could I really handle it—that area of L.A. is like Times Square, claustrophobically seething with tourists (I guess much like myself). Besides, Marilyn was the goal. After I got my picture (rather, happily, a series of them because KL went to film school!), we left to have lunch at a rather “California” restaurant called Aroma and, to my delight, up to see the Hollywood sign.

Before we get to that, though, fun fact: did you know the parking meters in L.A. take credit cards? KL informs me it's quite the plastic town. Obviously, in more ways than one. KL is a film producer, so he has to sort through a lot of garbage and has learned a few things about the city. For example, a screenplay isn't really worth anything--it's just ink on paper. But it's everything that's attached to it--potential, money, etc.--that make it worth something. L.A., he says, is a town that continually makes something out of nothing. The city itself was just a desert before people found a way to bring water to it. It wasn't worth anything. And now it's worth so much. Technically, anyway. Like the screenplay. 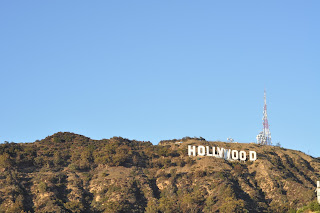 But, to the Hollywood sign. Something people forget to tell you about L.A., or maybe forgot to tell me about L.A., was how beautiful the hills are. I've never been in an environment like that before, one that's so distinctly urban and still so natural. Up near the Hollywood sign, the road twists and turns past one-of-a-kind homes slouching into the hillside and opens up into this open, green area where all you can see is green, dotted with the occasional house. There are deep valleys and dirt and fields and the air is so crisp and cool I could really just stay there forever. The letters in the sign shone bright white on the green hillside, just hanging out. No big, we're only just one of the great American landmarks, la di da. I tell KL he should ask a girl to marry him up there, but for him it's far too cliche--like asking someone to marry you on top of the Empire State Building--and I can understand that. I don't really want to leave. I just want to sit up there and breathe some more of that air (as I'm sure you know, we don't have too many hillsides in New York!), but KL is a busy man and has other places to be. It's all for the best, though, because maybe if I spent too long there I wouldn't want to go back. But I didn't, so I do.

Monday morning brought an early rise as the Affinitas ladies picked me up and took me to our shooting location, a gorgeous loft on the seventh floor of a building close to downtown. Looking out the windows, you could see all across the city, and when the sun set, it oozed lavender, melon, and yellow across the sky and through the panes of glass. I forgot how much I missed sunsets. The entire day was a blast, working with the photographer, makeup artist, and marketing team to get everything set up. I picked out the different lingerie and jewelry ensembles that will appear in an upcoming catalog, which is incredibly exciting!

That night, I reconnected with RH, a dear friend from college. We hadn't seen each other in years and had barely spoken, but somehow it all fell away. I guess that's how you tell who your real friends are--when time can pass and it never matters. RH took me to lovely Santa Monica (where I think I would like to live if I lived in L.A.), which reminds me so much of Fort Lauderdale Beach but with less tourists and better weather. We walked up and down
Santa Monica Pier at night, sort of L.A.'s answer to Coney Island but not at all dirty, chatting about life and the universe and family and progress and personal growth. Neon lights from the rides slashed through the dark night sky while our shoes click-clacked on the aged wooden boardwalk. The sea was silent and dark, scary and endless but in a beautiful, uncertain way. We found a lovely little restaurant called The Misfit, where we dined on small plates (I still cannot get the bacon-wrapped dates stuffed with goat cheese out of my mind. RH, if you're reading this, please go back and eat them all the time for me.) and interesting cocktails and talked and talked. RH effervesces--L.A. agrees with him, and it shows. Far more than the cold and grey of Pittsburgh where we went to school.

One of my favorite things in the world is seeing someone's city from their point of view. "Take me where you go!" I say with a bright smile on my face to my friends. You get to see a part of them you might never see otherwise, a part that is love for a place you don't know and can't duplicate on your own. But seeing them love it makes you love it too. So for all the things that people say about L.A., I have to say I liked it quite a lot. But then again, I had excellent hosts. I only wish all visitors to L.A. the same experience.
Posted by miss-manhattan at 12:27 AM No comments: