When Alli Green and I arrive at the Roosevelt Island Tramway station, we see the next tram will depart in 12 minutes. The only public transportation like it in the city, the tramway goes through the air over the East River and lands, of course, at Roosevelt Island, in between Queens and Manhattan. Taking the tram crosses an item off of Alli’s New York Bucket List—in a matter of days, she will be leaving New York to go to business school at the University of Washington in Seattle. There, she hopes to prepare for a career in corporate social responsibility and sustainability, which would allow her to help large businesses improve environmental, energy, and economic practices alongside socio-cultural interactions. She would, for example, be promoting ideas like the reduction of a carbon footprint, conservation of nonrenewable resources, and support of community-strengthening initiatives in places where businesses are based. I know Alli through her roommate, into whom she has engrained the importance of recycling.

Before heading off to business school, however, Alli is going on a cross-country road trip with a friend, stopping at or in Cleveland, Chicago, Sioux Falls, Badlands National Park, Mount Rushmore, Yellowstone National Park and, her last stop, Seattle.

Today, though, a shorter trip to Roosevelt Island. The city flies underneath us as the tram goes higher and higher into the sky and over the East River. We land in Roosevelt Island, which seems to be a pseudo-suburban oasis, with its apartment buildings all of similar size, shape, and color. There’s a Duane Reade, a diner, a pizza place, a Japanese restaurant and even, across a well-manicured garden, a Starbucks. “Of course,” Alli chuckles. We stroll around the tiny island, stopping to look at the views across the East River of the 59th Street bridge, Long Island City, and what is perhaps an industrial waste park. She takes some pictures with her phone then turns it toward me, “Now it’s Alli Green Hangs Out with Miss Manhattan!” We laugh.

Feeling peckish, we head for our next destination in Manhattan, but when we arrive, there’s a line around the block, even in the middle of the afternoon on a Tuesday. Ugh, tourists. We instead decide to go to Alidoro, a decades-old Italian sandwich shop.

We look at their lengthy list of over 40 sandwiches, from which you are not-so-subtly urged to make a selection before arriving at the counter, to definitely not ask what the counterperson’s favorite sandwich is, to make sure you have cash because, no, they don’t take credit cards and never will. Alli goes for the Pinocchio: prosciutto, soppressata, fresh mozzarella, sweet roasted peppers, olive paste. I choose the Mona Lisa, fresh mozzarella, artichokes, eggplant caponata, Bel Paese.

Our sandwiches are ready quickly and we sit outside at a marble table in two yellow metal chairs, diving into the heaps of meat, bread, and cheese in front of us. “Olives are the way to my heart,” Alli says. And soon every last crumb is gone. 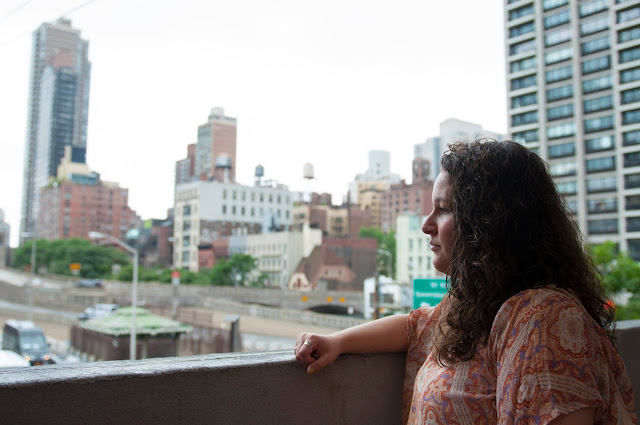 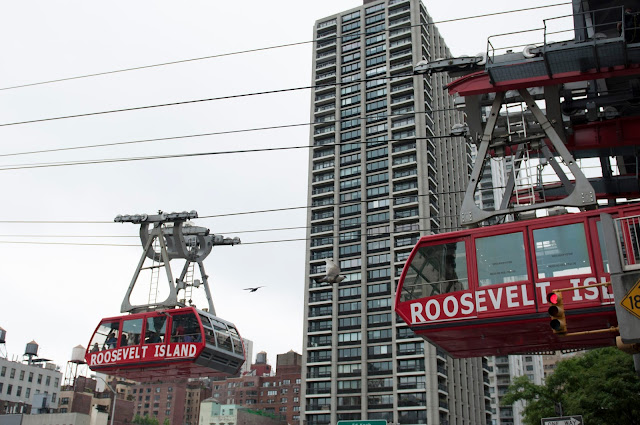 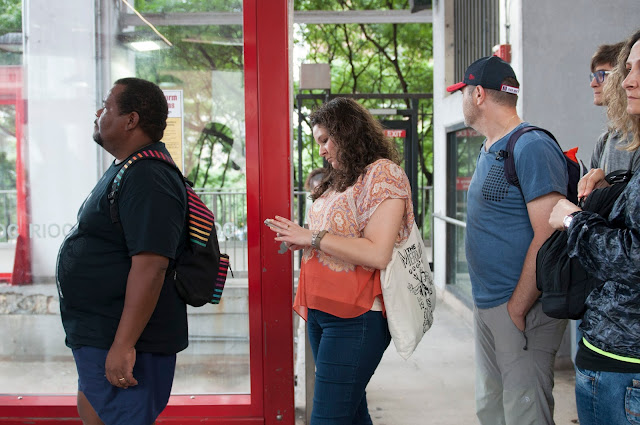 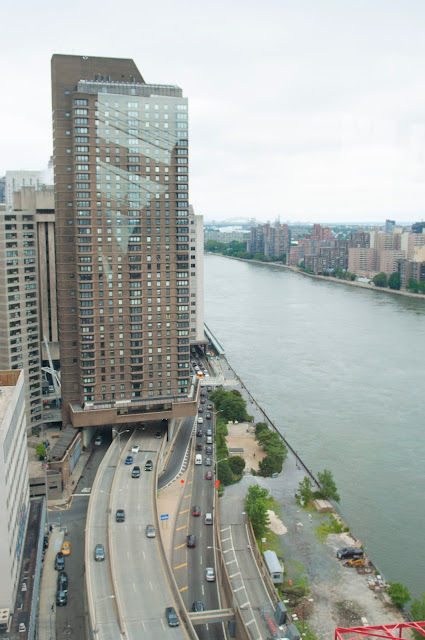 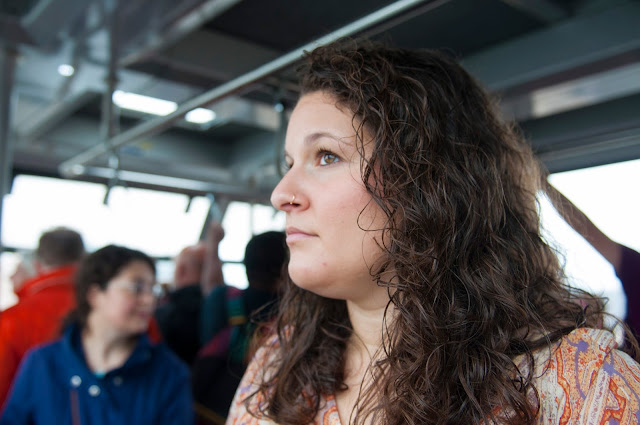 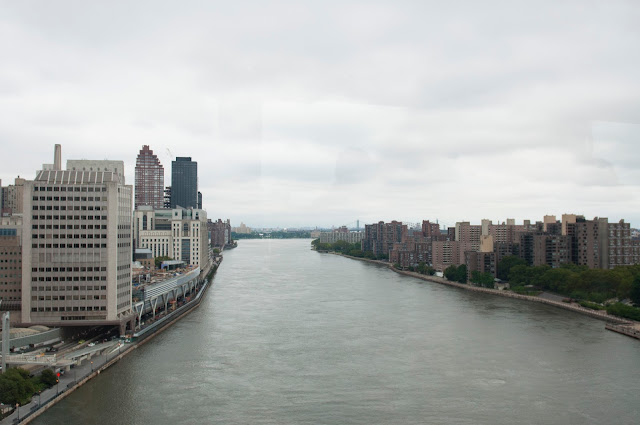 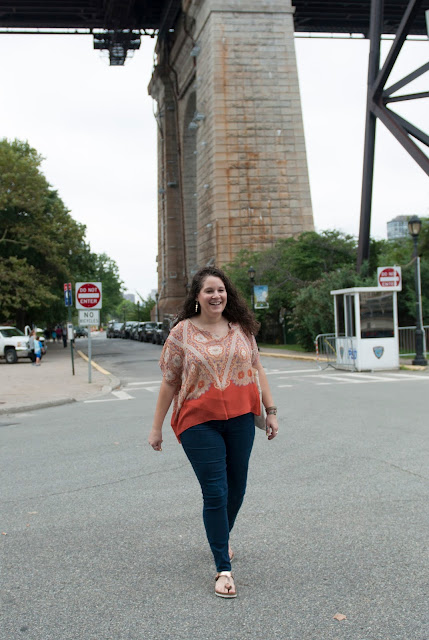 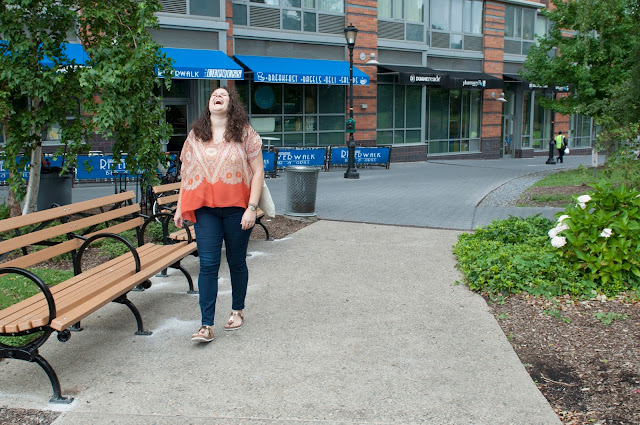 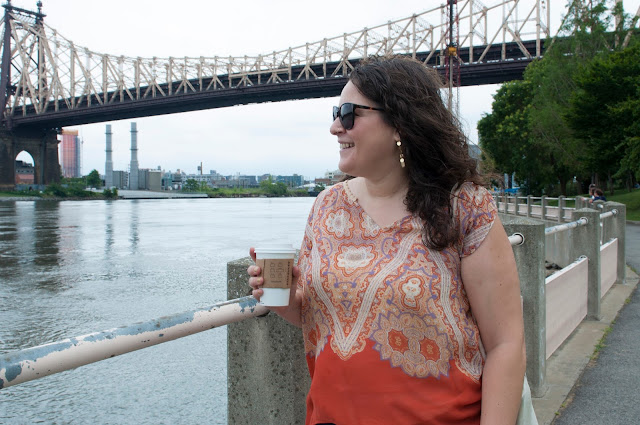 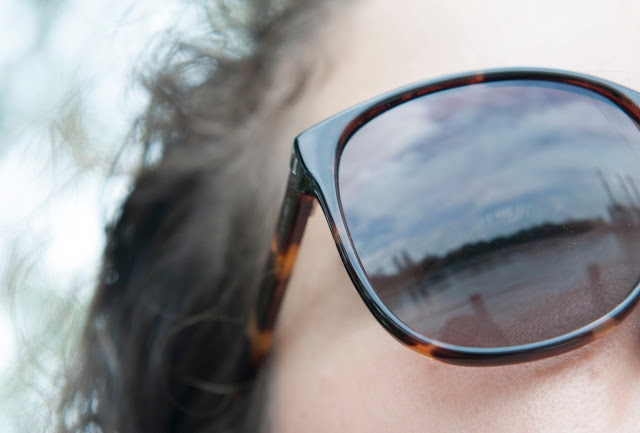 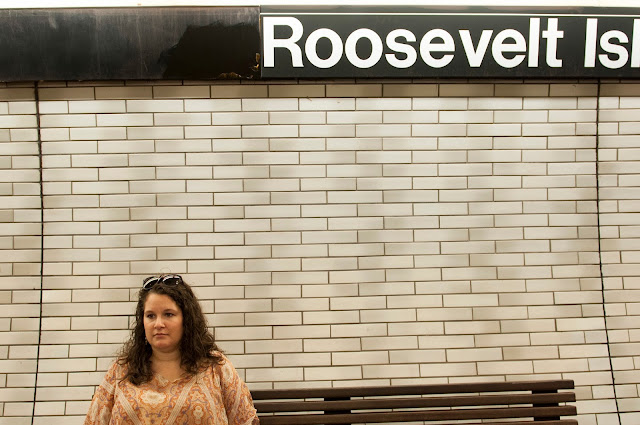 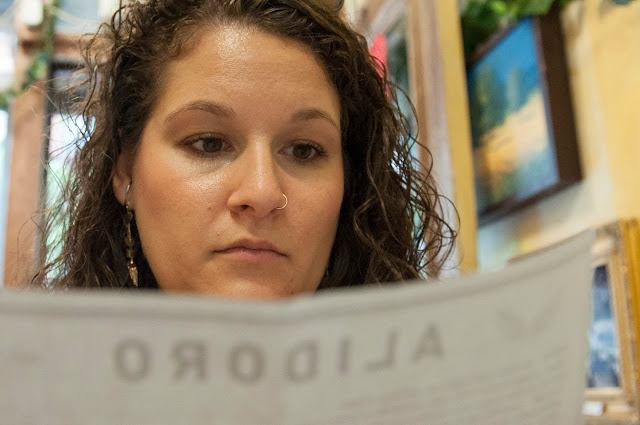 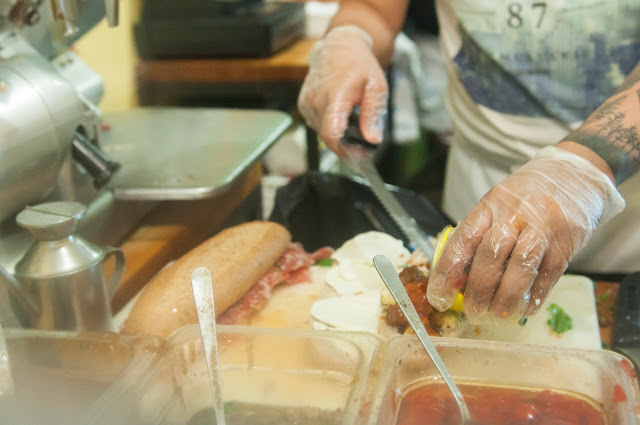 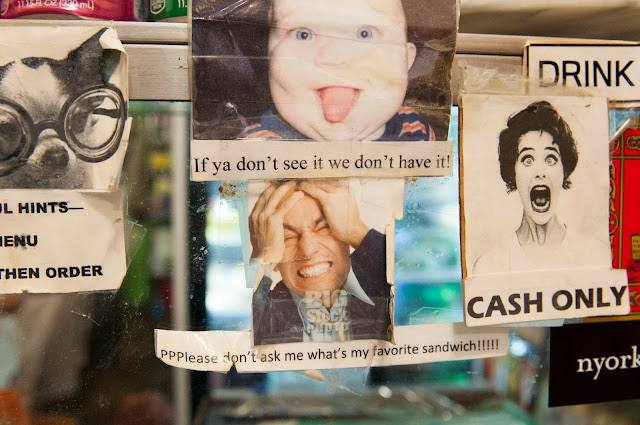 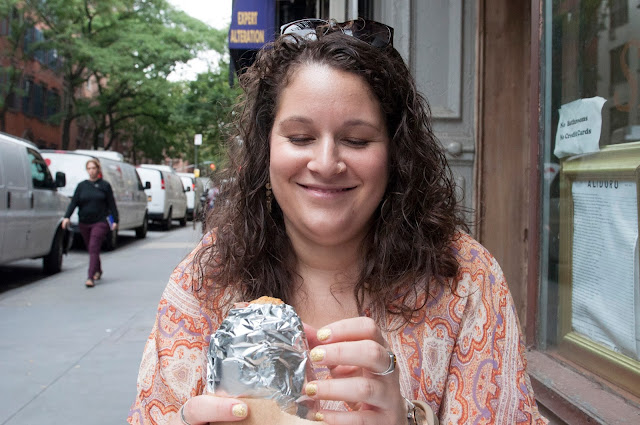 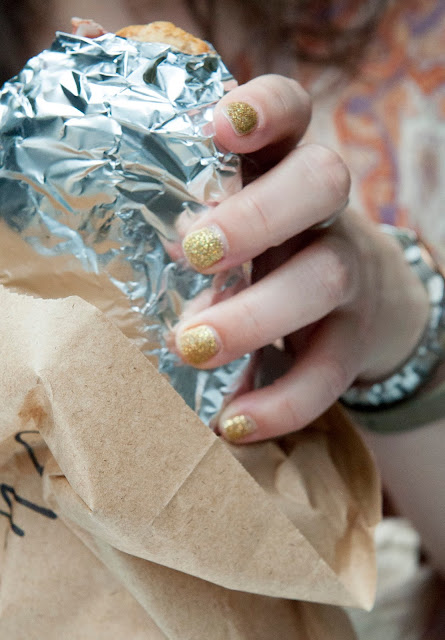 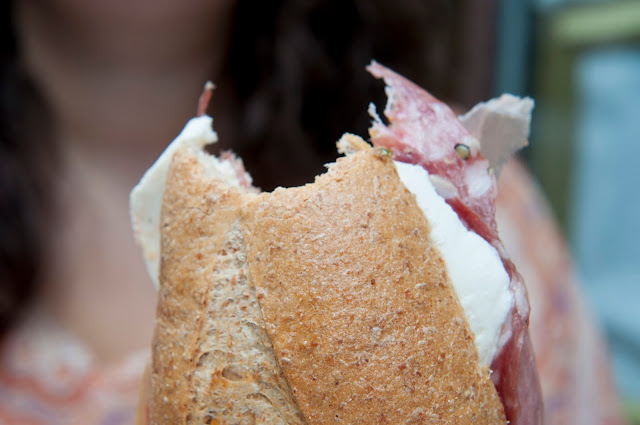 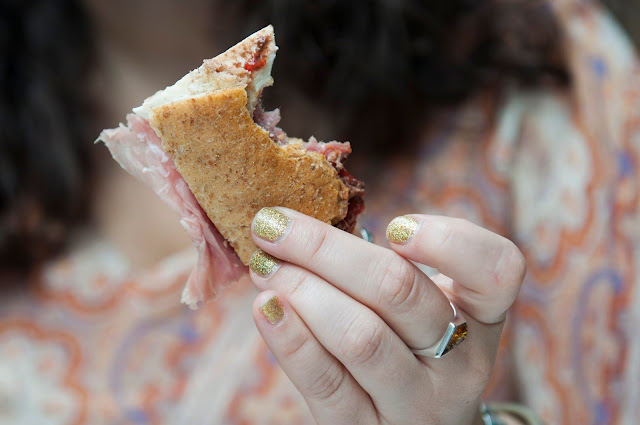 Posted by miss-manhattan at 8:38 AM No comments:

It's a June evening so the air is warm but still cool enough to walk through without feeling a film of moisture develop on your skin. HanOre and I are walking from Town Hall, following the sound of salsa music to Bryant Park. It turns out there's a free salsa dance that night, with tons of people crowded onto a rectangular dance floor near the 6th Avenue edge of the park. The lawn of the park itself has lots of pockets of empty space for us to sit, so we plop ourselves down and remove our shoes, memories of our evening like programs and handbags scattered in front of us. The lights overlooking the park are so bright it doesn't feel quite like nighttime, rather some amorphous otherworldly time that doesn't exist on Earth as of yet. People sit on rust and crimson blankets provided by the park, but we sprawl out on the grass. It's cool under our feet, nice enough to rub my toes between.

Not far away, there are booths set up for local vendors, one of which is Moon Man, selling kue pancong, Indonesian coconut pancakes. I get one with a Java palm sugar and flaked coconut topping, which is then set aflame with a blowtorch. It's a bold caramel flavor, and the burnt sugar crunches in my teeth where it's been burnt. HanOre and I share the coaster-sized treat and sit down again, listening to salsa music while enjoying our dessert. 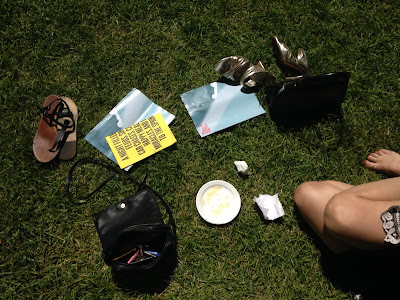 When we part ways, I walk down 42nd Street to catch a train, only to find a gaggle of vintage cars parked between 5th and 6th Avenues, bachata pouring out of their speakers and into the warm, crisp night. An orange Ford GTO, a lacquer red Chevrolet Bel Air are among them. Fuzzy dice hang from rearview mirrors, cars shine with a combination of glittering paint jobs and bright white streetlamps, children sleep in backseats. Men and women sit by their cars in plastic folding chairs, sipping beers and chatting in Spanish. Under their feet, neon light radiates from the cars' undercarriages and license plates onto the ground. 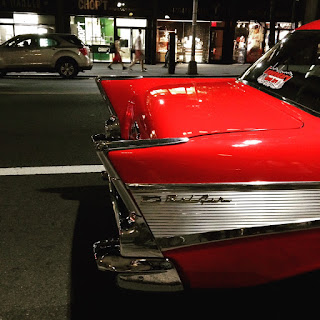 On June 28, the "Eloise at the Museum" exhibit opens at the New-York Historical Society. Having written about it for Town & Country, I am invited to the opening party with a guest. I bring HanOre, who named her beloved tuxedo cat after the wily Plaza resident. I was older when Eloise was re-released, but I fell in love with her anyway and ended up owning all four of the books in the series. She was both an aspiration and an inspiration, this petite troublemaker who just did whatever she wanted, and I found myself especially connecting to the books' drawings by illustrator Hilary Knight. I even found a book he had illustrated, Algonquin Cat, at a used bookstore and bought it without even thinking simply because he had drawn it. His drawings were also part of my life as the elegant paper dolls that came inside the thick Neiman Marcus catalogs my mother would get in the mail. I still have them tucked away in a Ziploc bag.

I had the opportunity to interview Knight, a spry 90 years old, at an exhibit of his theatre drawings (Hilary Knight's Stage Struck World, on view until September 1) at The New York Public Library's Performing Arts Library. He walked me through the entire exhibit, sharing anecdotes from his childhood, his favorite posters he's drawn (Dance Theatre of Harlem is among them), his hopes for projects in the future. If you had asked me at 12 if I would ever have the chance to do that, I would have leapt and cried with joy. Yet there I was, walking through the Performing Arts Library, my shoe taped to my foot--in a stunning fit of Murphy's Law, it had broken mere minutes earlier as I was crossing the Lincoln Center courtyard. Imagine me, on my way to meet an artist whose work I've admired for more of my life than not, with a sandal snapped in half, hobbling into The Metropolitan Opera's Gift Shop to ask if they sell shoes. Reader, if you are curious, they do not. But they do have Scotch tape, and if you tell them your shoe has broken before you are about to do an interview, they will let you use some to gather what little shreds of your dignity are left and tape the damned shoe to your foot like the lady that you are.

Hilary was kind and gracious, and I listened as he discussed the posters and dioramas and album covers and costumes he had made over the years. I knew the man had done more than just Eloise, but the breadth and depth of his other works I did not know. For as long as I live, I will consider it one of the greatest gifts I have been given to walk through the space with him, to have had the opportunity to hear him tell me himself.

At the exhibit, HanOre and I pose with Eloise. I still hope her rambunctious spirit courses through my veins even a little. 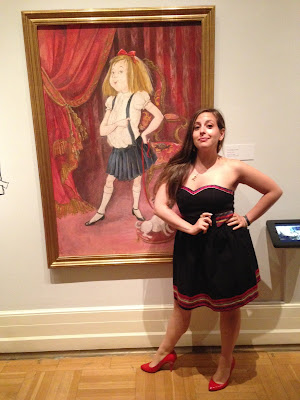 SE and I are in the Catskills for 4th of July weekend with our host for the weekend, J. We have driven up to Mountaindale, New York, not far from the now-mythical Borscht Belt Catskills of my parents' (and, incidentally, SE's) youth. The air is cool and clean and clear, trees for miles, the smell of oak and fir and birch in the air. I love New York, but it's nice to be somewhere else for a little while, too. Inside the cabin, we eat Italian breads and meats and cheeses at the dining room table over a table covering that looks like a knit doily. Nearby a photo of the Pope sits in a red glass. There are pictures of J and his sister as children around the house, yellowed with age even though J is not so old.

Later, we drive around the area and see the overgrown golf courses and abandoned homes that punctuate each road. It makes my heart sad for the Catskills my parents knew, the summers they spent in Sullivan and Ulster counties that by their own admission made them who they are now. Why doesn't someone redevelop the area, rescue all of the decay from itself and give the area new life? 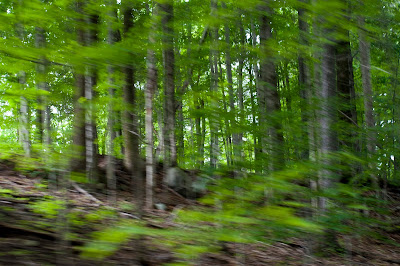 After dinner, we sit outside and listen to the local radio station play blocks of artists like Smashing Pumpkins and All-American Rejects on repeat. I forget to wear bug spray and pay for it later.

We wake up the next day and head to a diner then to a Walmart next door in search of sparklers and s'mores fixins for that evening's festivities. We'll also head to an auction at which boxes of tools are going for mere dollars to an enthusiastic crowd. The tools are followed by vintage or just old goods, like an armchair worth $3000 or a box of dolls. I'm surprised to find the adrenaline of bidding pulsing from the center of my chest. I win a hand-etched Sherry bottle.

That evening I remember to put on bug spray but I eat too many s'mores. 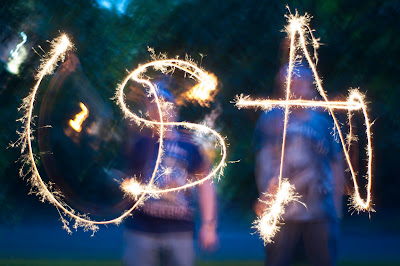 Posted by miss-manhattan at 11:22 PM No comments: