The Philadelphia Story, Part 2 of 2: This Ain't No Starbucks

When I got to Philadelphia, I was dragging a little from having only 4 hours of sleep from the night before (thank you for an epic evening EJ, EW, and company!) and I needed a pick-me-up. I stopped into what I thought would be some nothing little coffee place where I’d get some rando coffee in a dumb little plastic cup with more ice than caffeinated beverage. Instead, I wound up at RIM Café, a French Chocolate and Espresso Bar in the heart of South Philly’s Italian Market. I didn’t know that when I ordered.

“Do you make iced coffees?” I asked the guy behind the counter.

I didn’t think an iced coffee could be good or not good, but then again I was only a novice coffee drinker.

“Our iced cappuccinos are better, though. How ‘bout one of those?”

“Go for it,” I said. I was feeling adventurous.


The guy, Spyro, disappeared into the kitchen. I waited for what I thought was going to be some plastic cup filled ice cubes and foam, but Spyro returned with a frosty silver tumbler and what might’ve been a tall beer glass.


He placed the glass in the center of a lazy susan covered in shavings of some kind, spun the susan and began pouring. A thick, creamy, foamy tan liquid spilled from the tumbler and practically danced into the glass. This ain’t no Starbucks, kiddo. 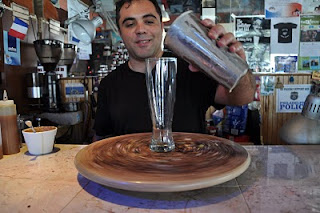 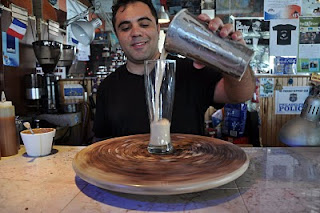 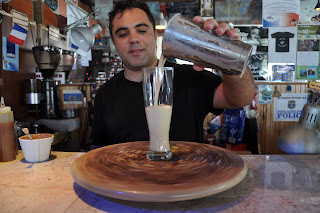 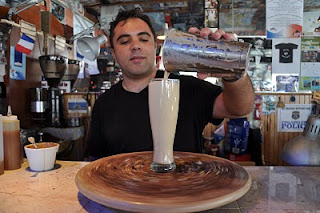 But it wasn’t over yet.

“How bout some chocolate?” Spyro said. “We make it ourselves.”


Truth be told, I’m not much of a chocolate person. I like a piece now and then, but too much makes me thirsty and sometimes I really just like a gummi worm if I’m going to have candy at all. The lure of homemade chocolate, however, was too strong.


With another spin of the lazy susan, peanut butter chocolate was shaved into my glass. Then truffle chocolate. Then chocolate covered parmesan cheese. Then I think three or four other chocolates I can’t remember right now. And then,“You gotta let me do this,” Spyro said.

Before I could say anything, out came a pot of chocolate caramel sauce and a spoon. The lazy susan was spinning again, making the chocolate into a beautiful pattern that rested on the foam and on the outside of the glass. 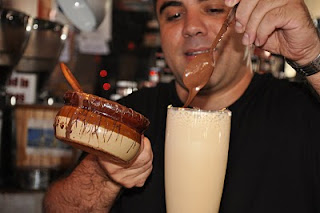 And it was all delicious. Cold because of the cappuccino, sweet but not too sweet on their own. I have never so actively chewed a beverage before, even nibbling on the outside of the glass where the chocolate sauce had solidified.


What was this place? RIM Café was opened by Rene when he moved from Nice, France to Philadelphia in 2006. The actual location used to be a butcher shop, but Rene made it into a comfy little espresso bar (LavAzza espresso only), complete with actual bar seating. Spyro is his business partner, and he makes a mean ice cappuccino.

RIM is also known for the best hot chocolate in the city and a drink called The Volcano. I don’t know what’s in it, but I know it involves creamy, foamy chocolate literally spilling out of a glass. My Aunt Adrienne is a known chocoholic, and somewhere her mouth is watering and she doesn’t know why.


I have a feeling RIM Café is the kind of place people go once by accident but come back as regulars forever. I know when I’m in Philadelphia again I’m dragging my friends there. Not that I’d have to. I’m sure The Volcano is temptation enough.
Posted by miss-manhattan at 12:34 AM No comments:

The Philadelphia Story, Part 1 of 2

I traveled through three states this past weekend en route to Philadelphia to see The Divine Sming (TDS as she will be called) and really I wouldn’t have had it any other way.

At 10 o’clock Sunday morning, I left my apartment to take the 6 train to the E train, a train I had never taken before. Catching it from the 6 involved walking two long blocks underground, a dark, terrible-smelling elevator, and what has to be the world’s longest, steepest escalator—so steep I had to actually shut my eyes at one point because it was utterly dizzying. But eventually I made it to Penn Station, purchased my tickets on the New Jersey Transit to Trenton, where I would later transfer to Philadelphia, and was on my way.

Getting to the train actually felt like the first time I went to the airport by myself when I was coming home for Thanksgiving my freshman year of college. I just kind of looked for the signs, mildly panicked when I couldn’t find them but then calmed down when I eventually did, and made my way through the train station. I hopped aboard the train and found myself a nice window seat on the upper deck of the train so I could see what this New Jersey business was really all about.

I have driven through New Jersey twice, I think. Both times were mostly only on the highway where we had to occasionally stop and have our gas pumped for us—a completely surreal experience although I do think it’s a nice way to create jobs. And of course I’ve been to Paramus when dressing Sweet Caroline in Ikea’s finest.

On the train, though, I got to see a bunch of different parts of New Jersey I hadn’t seen before. There was the murky, post-industrial Secaucus; the cleaner and classically suburban New Brunswick; and the, well, kind of nondescript Princeton and Trenton. A disclaimer: I have only seen the parts of these places surrounding the train tracks and could very well be entirely mistaken on all counts. Either way, it was nice to see places I don’t usually see, as it always is.


I didn’t realize how much I would like Philadelphia. I didn’t think I would dislike it, but it definitely made a good impression on me, like a really good interview.


“So, what’s your story, Philadelphia?” I said.

“Here, let me tell you,” the city replied.


Philadelphia’s 30th Street Station, my first view of Philadelphia, is quite beautiful in and of itself. It’s like the Grand Central of New York, but separated into two buildings—one for regional rail and one for national rail. The inside is done in a 1930s-deco style, a beige-gold color with many gold fixtures. Massive swirls of wooden bench sit, stately, in the station’s main waiting area which I couldn’t help but photograph. 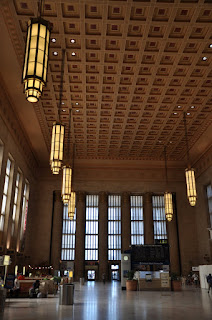 Onto the cab, where the driver took me on the highway around the city (Benjamin Franklin Parkway, I think it was?) and I saw that fantastic blue bridge I also don’t know the name of. It was a thick pastel and it just emerged out of the blue sky and took me by surprise. I have a feeling I simultaneously said, “Oh, hello!” and “Wowwwwww.” But it wouldn’t be the last time I said this on my trip.

Part of my visit to see TDS was to see her perform that weekend in the Philly Fringe Festival. The Fringe Festival seeks to “provide an opportunity and a platform for Philadelphia-based artists to produce their work.” I was there not only to see TDS but to photograph the performance “Picking Up Pieces,” a dance piece choreographed by Philly native Abby Shunskis. The piece was so thoughtful in idea and choreography, as well lighting, casting, and costume. It was also so beautiful I cried when I saw the tech rehearsal and had to excuse myself. Art of any kind does not usually move me to tears, but I openly wept, nay, bawled. I don’t want to tell you what the piece is about because part of the beauty of the piece is finding out the story for yourself and I want you to actually see it yourself, but I will tell you that it put not only life’s journey in context for me, but the journey through life as a woman. You can read some more about the piece here at http://www.livearts-fringe.org/details.cfm?id=14121 and please go see it on September 25 at the CHI Movement Arts Center. You will not be disappointed.


Before I photographed the performance, though, I wandered along S. 9th Street and was happy to see two of the most famous Philly Cheesesteak joints around—Pat’s and Geno’s. I wasn’t able to go to either of them, though, because the lines wrapped around each building twice. All the same, I was just as happy to take some pictures of the rival cheesesteak joints. I felt like I was suddenly inside one of those tall tales—legendary cheesesteak joints perpetually battling it out for Philadelphia’s crown. Meanwhile, TDS doesn’t even eat cheesesteaks and DJ YS prefers a place called Ishkabbible’s. Go figure. 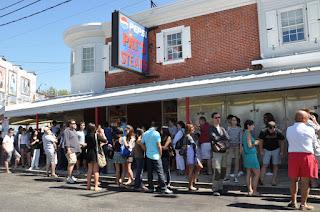 Later, though, after the performance, I was in for some more treats. TDS and her dad were kind enough to host me for the evening in their home, just outside of Center City and offered me a most divine (in true Divine Sming fashion) automotive tour of the city. A brisk, end-of-summer cool swept the city as we climbed into the minivan. Soon, though, we were driving down the Avenue of the Arts and my head was out the window and my camera was in front of my face as I snapped pictures like a madwoman. 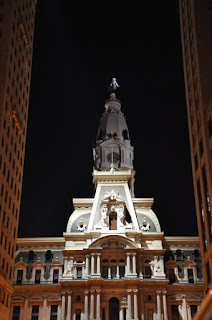 
It turns out the entire city was modeled after the setup of Paris, which really isn’t too surprising if you consider the impact French thought had on our own government in its nascency. I see this a couple more times as we drive through the city, especially as we pass the art museum (the one with the Rocky Steps) since the street in front of it looks just like the Champs Elysses.


The entire time in the car, I am a hot touristy mess. “OH IT’S SO BEAUTIFUL! WOW! OH MY GOD! PHILADELPHIA IS AMAZING!” TDS and her dad laugh, but it’s all real. Every little tidbit of Philadelphia info they throw at me is interesting and helps me understand their city a little bit more.


As we leave the main part of the city behind, though, TDS asks her dad if he can drive by the boathouses. I figure they were just literally old boathouses, but I was completely wrong. The boathouses might be just old boathouses by day, used by local crew teams, but by night, they are as black as the night itself and only visible because of the edging of tiny gold lights around each and every building. It created a Christmas-like effect right then at the beginning of September, and it stretched probably for a good mile. I’m guessing each boathouse was different because they were all edged in different lights, like a life-size golden line drawing on black paper.


It reminded me of South Florida’s Intercoastal in December, where all the magnificent homes are lit up with Christmas lights and you take the Jungle Queen like a huge tourist to see them all. I suppose if you’re wowed by little tiny lightbulbs, though, you must be a tourist of some kind whether you’re in Philly or SoFla.


After the boathouses, I knew Philadelphia and I would be great friends. Maybe not lovers like New York and I, but definitely friends. The kind that might live far away but are always there to share something beautiful with you when you need them to.
Posted by miss-manhattan at 12:15 AM No comments: