This Friday, August 9th, OXHEART will present its eighth event, CURRENT at 3rd Ward in Brooklyn. We'll have a fantastic lineup of tunes and performances, all topped off with the cherry that is one Mr. Alfie Bunz, emcee and performer extraordinaire. Take a look at the interview with Alfie below and get psyched for another superrad OXHEART show!* 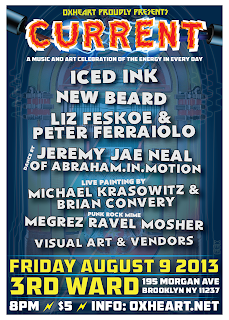 How and when did you begin emceeing and performing?
I began performing during spring, in 2011. My first show, ever! Pat Muko [sideshow and burlesque performer] and Dick Zigun [founder of the modern Coney Island Sideshow] had (still do have!) so much faith in me; they invited me to do a burlesque show, then their Halloween Creepshow at the Freakshow. I started emceeing when I became the Bilingual Bally Master at Coney Island USA, 2011. I was given the “groovy” opportunity to host the Gowanus Circus (Noah from Brooklyn’s baby), and I became the Emcee/Ringmaster. Been workin' the crowds, ever since!

What made you get interested in sideshow culture?
My romance began in 2010 when I started working for the sideshow. I really didn’t know what I was getting into. I thought it was just a cashiering job. As the months went-by, I began seeing the strange happenings at Coney USA, and when I saw Scott Baker do the blockhead. It had been the first time I had ever seen any type of sideshow. From that moment, back in April 2010, I was in love!

What is your favorite part of emceeing and performing?
Anything that I would do on a stage wouldn’t be worth my while if not for the people! I live and breathe for entertaining people; the good, the bad and the ugly. I’ve had people get up and walk out when I hit the stage. I’ve had people compliment me…but, when ya get that ovation from your audience, you know you’ve reached them; you know you’ve entertained them. This is the height of any time spent on stage, for me!

What is the most shocking sideshow trick you've ever performed?
Before I begin, let me clarify that they are not tricks. They are acts. A trick implies some kind of an illusion; this is all real, all alive… Now, this was back in 2011. I was in Philadelphia, performing with [circus performers] Alejandro Dubois and Rev. MacKenzie Moltov. I did a mental floss while eating glass and standing on glass…Then, I proceeded to blockhead, all while snapping a rat trap on my hand. ;-) This is light, compared to what my brothers and sisters in sideshow can do!

How did you learn to perform sideshow acts? How long did it take?
Sideshow acts can be learned in a day, or in a week…or…maybe longer. Quite honestly, it’s mind over matter. Pardon the cliché: practice makes perfect! But, the first act I learned was the blockhead. The incomparable Scott Baker taught me the act…the rest is history…

What can OXHEART-ers expect to see from you at CURRENT?
They will have to come and watch!  …and…that’s that…hehehehehe!

What performers inspire you most and why?
Tigger! (Boylesque performer) and Scott Baker; they both know their stuff! They are confident, amiable, have incredible stage presence and are incredibly talented performers. When they hit the stage, they illuminate it entirely! In one expression: “The Sun came up!” The level of their professionalism and respect and love for what they do, well, they are genius!

What do you do when you're not performing?
I have a day job. But! Aside from this, I love being surrounded by nature. Love hiking and camping. I am currently taking classes to learn how to swim in the open ocean! Can’t wait to master this skill!  Otherwise, I’m always making costumes, developing choreography because I do sideshow, but I also do Boylesque. Then, it’s just about spending time with family and friends! This is my favorite part about life…then…there are those moments when a stroll is just enough…

Where else around New York do you perform?
I perform at the Parkside Lounge (East Village), where I host a burlesque show for Sake Fevah, in Drag! I also perform in Long Island City, and just all over…including Philly and if all goes well, next Spring in Sydney, Australia!

*sponsored post
Posted by miss-manhattan at 12:09 AM No comments: