Top Great Moments I Didn't Write About But Should Have: 2013 Edition

As every year in publishing ends in a year's worth of listicles, so too does mine here at Miss Manhattan. Granted, I am in fact starting my year this way, but I like to use the beginning of the year as a time of reflection. So many moments come along that I want to write about but simply can't at a particular time, so I've selected a few of my favorites from the past year to share with you here. This is the second incarnation of such a list, my first being last year.

Get Published
I am fortunate enough to have been published in some amazing media outlets this past year. As I once said, it was a moment when I realized I had a career and not just a job. It's the stuff I moved to New York to do.

And I got to interview the most recent winner of RuPaul's Drag Race!

I was also incredibly honored to have a photograph I took on the cover of Time Out New York's Summer Parties issue in mid-July. 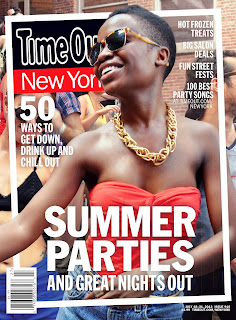 Go Bhakti or Go Home
I had a wild night this past summer that began at a Bhakti Monastery and Community Center, the Bhakti Center, on 1st Street and 1st Avenue. Many thanks to RaGo, we attended a screening of the film Run, Lola, Run and participated in a discussion on the way the Vedic principles present themselves in the film. What I loved about this was not only the enlightening discussion and opportunity to learn about the Vedas, but that it was not at all dogmatic. It was simply a group of people discussing their beliefs and inviting me to listen, not begging me to convert. And frankly, all it was was a discussion on doing right by your fellow man, and I'm all for that, so it didn't bother me at all. It was followed by a delicious meal homemade by the monks (samosas! salads! pastas!) and a mingling session. And it was all free!

After that, RaGo, her friend and I made our way to The Blind Barber, a speakeasy in the back of a barbershop in the East Village. After a drink, I noticed a text from RE on my phone--he was in town for something like 16 hours, and since he normally resides on the West Coast, I was determined to see him. I raced uptown in a cab to 96th and Amsterdam, and there he was. We puttered around the area with a group of people, pausing briefly to dance at a very crowded bar that in between its live music session, featured a mix of top 40 and Prince tunes. But once the band started to play, we departed for Hell's Kitchen. We found ourselves at the Hourglass Tavern's upstairs Betti Bar with some of his friends. Soon, it was 2am, and RE departed to get something like 4 hours of sleep before heading back home at 6am.

I was just getting in a cab when AE rang my phone. He was in town visiting from Seattle, and we had just had the opportunity to reconnect after 8 years. I went to meet him at Links, a sausage and beer joint on the Lower East Side, where we hung out and talked some more until 4am. I thought I was going to pass out by the time I finally got in a cab. I heard birds chirping as I fell into my bed around 4:30. That's what nights in New York were made for.


Ailey Day
There are few more people I enjoy consuming culture with than DW. I had gotten free tickets to see the Alvin Ailey Dance Theatre's famous Revelations at Lincoln Center, and of course took him, my fellow dance and culture aficionado, with me. We sat and gaped at the amazing dancing (Ailey's "Sinner Man" is not to be believed, nor is Jiri Kylian's sassy, funny, sexy, smart "Petit Mort").

Afterward, DW took me to the wonderful Red Rooster Harlem, Marcus Samuelsson's gourmet Southern cooking restaurant. It was utterly sublime (and as I write that I am thinking the French pronunciation, "soo-bleem"): fried chicken and waffles with bourbon maple syrup, anyone? How nice it is to go out with a friend and enjoy a day at the theatre.

New Jersey
I will admit, I have a love-hate relationship with New Jersey. I find its suburban, culture-less presence irritating and fear for my life that I will one day end up living there. But, as much as I feel this way, I love visiting my friends' family homes--it's fascinating to see where people come from and everyone's homes are so beautiful in their own way. Such was the experience of visiting SJT's residence in South Plainfield. His family has an orchard in the backyard, bursting with pears, berries, veggies, and so much more. His father has a gorgeous old Dodge Dart in the driveway and a wild model train collection set up in his basement. His mother hangs clothes on the line outside, right above their roses. We made a lovely dinner and ate it while sitting on the porch, doing our best not to feed his dog Ginny (named for Gin and Tonics) any of our goodies. At the end of the evening, DW drove me to the train station and on the way we listened to Dylan's "Idiot Wind" and Kanye West's "Yeezus," opining our strong opines about each.

Cosmo Quiz
One of the world's great treasures must be when ladies have a beach day. Such was the day when AS and I decided to head to Manhattan Beach, near Brighton Beach in Brooklyn. She had never been before, so we met up at Union Square and got breakfast for the train ride. Then we stopped at the wonderful Brighton Bazaar for goodies, many of which she had never heard of and I enjoyed describing--they were mostly treats I had encountered because of my Russian/Eastern European background. We got ourselves a picnic lunch, complete with blintzes and potato salads and drinks and other goodies for a total of $15 (hardly something you'd ever be able to do in Manhattan.

Arriving on the beach, the very fair-skinned (or, as she laughs, "beach disabled") AS set up her beach umbrella and I generously applied my SPF 4. Partway through the afternoon, we decided to start taking the very inane Cosmo Quizzes, quizzes from the famous women's magazine, on her phone, and laughing hysterically at the results: Do you put your career first? Yes? You're the kind of girl that can't wait to get hitched! What? Young sorta-feminists taking hyper-feminine quizzes on the beach will of course end the escapade in laughter.

Gallery Hop
As MDP taught me this past September, it's wildly fun to go gallery hopping when all of the galleries have their openings--they're usually on the same night, a Thursday, and they all have wine and beer for visiting guests. We went from Philip-Lorca diCorcia's amazing Hustlers exhibition at the David Zwirner Gallery (at which I found myself in the company of the New York magazine's art critic Jerry Saltz and Elle Magazine Fashion News Director Anne Slowey) to the Steven Kasher Gallery's Warhol Love Indiana photo series. MDP's boss, a famous photographer, happened to be there and invited us to attend the opening of the FIT's Queer History of Fashion exhibition. It was raining so we hopped in his car and drove, talking about photography along the way. While there we took in utterly cool exhibition (including but not limited to leather harnesses, an all-pink sailor suit, and other visions of gender-bendy goodness), we sipped wine and milled about the space. Yours truly may or may not have posed under an urn of rainbow colored feathers, modeling them as if they were a hat.

After that, I had the pleasure of introducing MDP to the deliciousness of The Meatball Shop in Chelsea,  and of the alcoholic milkshakes at the Olive Tree Cafe. It was an evening of unexpected delights, to say the very least.

Thicker Than Water
I am often in awe of the people I am fortunate enough to call my friends, though this time I mean specifically Scott Wasserman and Shannon Deep. The duo have composed a new musical play called Thicker Than Water, in which a young man meets his birth mother for the first time. It is entirely sung-through, composed by Scott with lyrics by Shannon. They did a beautiful job of making a complicated story interesting and engaging, and at their first workshop at Ripley-Grier Studios, I was on the edge of my seat, wanting--nay NEEDING--to know what happened after Act I. We went out for empanadas and margaritas afterward. I am utterly spellbound by their genius and am excited to see where it goes next.

Remembering Lou
I found out about the Lou Reed memorial at Lincoln Center less than 12 hours before it happened, via Twitter. The immense talent passed away at the end of October, and in the middle of November a tribute was held at the Paul Milstein Pool and Terrace at Lincoln Center. It was a simple setup, by Lincoln Center's standards, anyway: two massive, high-end speaker set up at the end of the park near the performing arts library, and rows upon rows of chairs. People stood and talked, they nodded to the music, they sat and thought about the great man rock and roll had lost. Salman Rushdie wore a Yankees cap and took videos on his iPhone. It was nice to see so many different kinds of people coming together to honor and listen to him. "Sweet Jane" played and the cold bit my nose. I kept saying I would only stay for five more minutes, five more minutes, five more minutes...


Posted by miss-manhattan at 5:31 PM No comments: