It has only been two days, and good lord Fashion Week has already worked its magic. I can hardly remember what day it is, my camera is exploding with pictures, my feet are blistered, I've been eating ice cream for dinner, and am constantly on the verge of passing out. And, strangely, I wouldn't have it any other way.

Two and a half years ago I stepped into the Mercedes-Benz Fashion Week tents and nearly cried. I was here! I had made it! I don't feel exactly the same now, though elements of the bright-eyed, bushy-tailed me still remain. My Fashion Week ensembles are more, shall we say, laissez-faire chic, less planned than in the past. I care less what people think and more about being able to walk comfortably in my shoes. Before many shows I am running around photographing backstage, too, so I *gasp* need flats so I don't die. After two days, I am tipsy with tiredness. God bless these people who do multiple shows  and parties and shows and parties every single day; even at my small number I am starting to feel it, and tomorrow I have back to back shows and events pretty much until 2am. Trust me, I am not complaining, though. This is the work all of us have chosen, the thrill of seeing new clothes for the first time, the rush of makeup artists and hairstylists backstage, the tip-toed walks of the models as they sashay or plod down the runway during rehearsal and rush into their clothes for 'First Looks' (the outfit the model wears on their first trip down the runway during a show). Just sometimes it makes you need a nap or three in between shows (if you have the luxury of 'in between shows,' that is). As I've said many times before, if Fashion Week were every day of my life, I'd have to hurt myself. It's not a way to live. But two weeks out of the year? Sign me up! One of the things I love about being tired, about being "Fashion Week tired," is that it's such a clear sign that you're living!

This Fashion Week, I will be backstage quite often and also in the audience quite a bit. It's a challenge to see something new each time, especially backstage where it's so often the same kinds of things happening--some hairspray there, some eyeshadow here. What I have noticed myself seeing more and more this time around are the people on their way to events--today I was on the train with a model who happened to be going to the same show I was photographing backstage. Long, stringy brown hair parted in the middle, black velvet harem pants and thick black flatform sneakers, a black leather backpack hanging from her back. She brushes past me and says "Excuse me" in a thick Eastern European accent, hair swishing behind her. Her portfolio is in her hand and she clomps up the subway steps in these giant shoes. Sometimes you'll see a fashion celebrity--read: people non-fashion-nerds don't recognize-- on their way to and from a show (Nina Garcia walked past me at BCBG yesterday, as did Kate Lanphear and Carine Roitfeld. I gasped inwardly and wistfully, in that way we all do when we see someone we want to talk to but have just instantly run out of all the words we've ever known). In some ways, the walkways outside of venues are great equalizers--we all have to tread on the same ground. Unless of course you've been ushered in the back way, which is another story entirely.

In the fast-paced, digital age in which we live, though, Fashion Week's place in, well, fashion, is being challenged. It is hardly as exclusive as it used to be (many designers this year, even, are live-streaming their shows) and barely serves its original purpose of exposing designers to editors and buyers in one place (the Mercedes-Benz Fashion Week tents). Many designers actually choose to have shows offsite, in art galleries or photo studios or even high school gymnasiums, to have smaller shows and preserve the original intent. A recent article in The New York Times addresses this very idea. Because if you are not writing about or choosing to sell the clothing, what are you really doing at a show? People have become obsessed with the exclusivity to the point where the clothes sometimes come second.

Every Fashion Week, I am befuddled at my own reactions to the event: a sort of "include-me-don't-include-me" deal where I am both inside and outside of the world at all times. I said recently that I try to look at fashion like an art form, to review and critique the way one would a gallery exhibition. In this way, I hope, I just get to observe beauty and not get sucked into some sort of trend making machine. I think I have always wanted the beauty and not the machine; the substance and not the submission; the aesthetics and not the obsessions. We'll see how I do. I only have five days left and already I find myself wanting more. 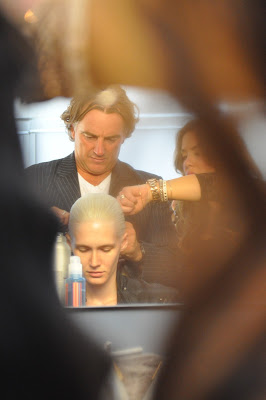 Posted by miss-manhattan at 11:18 PM No comments: