A story of an evening out, for no reason in particular.
At 2am, Feebs, ALiCo and I hustled ourselves into a cab.
“We’re going to Little West 12th and 7th, the Meatpacking District.”
“That does not exist,” the cab driver said. Problem. ALiCo quickly dialed LO, who corrected us—Little West 12th and 9th.
“So what’s it called, the Meat District?” said Feebs, who was visiting from Florida.
“Yup. Something like that,” I said.
Just below Chelsea and just above the West Village, "the Meatpacking District isa 20 square block, 24-hour neighborhood on the West Side of Manhattan, flanked by Chelsea Market to the North and Gansevoort Street to the South." About 100 years ago, it was home to 250 slaughterhouses but now contains numerous high-end designer stores, restaurants, bars, hotels and more, all housed in grungy-gorgeous old buildings, surrounded by thick, uneven black brick streets. In the past 20 years, after serious renovation, it's become what some say is "New York's most fashionable neighborhood." I don't know how much I believe it myself, but I'm sure everyone there thinks it is.
Leaving the cab, we walked past the sleek Hotel Gansevoort, subtly lit up with thin red neon lights and down underground to 675 Bar. Once we walked down the stairs  and passing through a door covered in graffiti, we entered through two glass doors into what looked like a brick lair for hip young people (with complimentary coat check). A red pool table lit by a giant horse lamp—an actual size horse with a bulb atop its head—occupied the front half of the room and the four of us found ourselves there for the rest of the evening. Turns out Feebs, ALiCo and LO are all really good at pool, winning something like four or five games in a row while I sipped a Tom Collins in a spiffed up barber’s chair nearby.


Eventually Feebs left us, having been up for 21 hours and desperately needing sleep, and we went off in search of food. ALiCo said loudly and happily to LO and I, “I WANT SOME PIZZA!” So we crossed over the Meatpacking District’s black streets and wandered down 14th Street until we found Rocky’s. The pizza place was still open because, well, this is New York and that’s how we do it here.
Around 4am, I sat on a newspaper vending machine and bit into a slice of ALiCo's Penne Vodka pizza. Anything tastes delicious at that hour, excluding or not excluding whatever beverages may have been involved up to that point.
Top 40 radio blasted in the background while I popped pirouettes and arabesques near the cash register, waiting for LO and ALiCo to get their food. LO shook roasted red pepper onto her pizza as ALiCo heaved her pizza outside. “Holy crap there’s pasta on my pizza!” she said. We sat and talked about nothing except how freaking delicious the pizza was while men who had hit on us at the bar walked past and tried to get our numbers yet again.
I jumped into a cab not too long after that and as we made our way down 14th Street, I watched all the lights go by. There were still people on the street, still traffic rustling past. “I love New York!” I said to the cab driver, just because I felt like it. He didn’t acknowledge me. I must be one of millions who have said that in a cab here at 4:30 in the morning. I didn’t care.
Posted by miss-manhattan at 4:33 PM No comments:

<a href="http://www.bloglovin.com/blog/2108561/miss-manhattan?claim=x7tfsh4ur5b">Follow my blog with bloglovin</a>

That code means Miss Manhattan is now a blog you can follow on Bloglovin.com! Go check it out :)
Posted by miss-manhattan at 10:20 AM No comments:

One of my favorite things about New York is the crazy things you can see from your window. On Halloween, people with apartments overlooking 6th Avenue got to see the parade, but this past Sunday people all over Manhattan and its four sister boroughs got to see the New York marathon.
At around 11am, I stepped up to those somewhat iconic police barricades and snapped pictures of the runners as they trickled onto the street from another borough’s bridge nearby. They ran in the sunlight on the left side of the street, as if they might freeze if they ran in the shadows on this already chilly day. 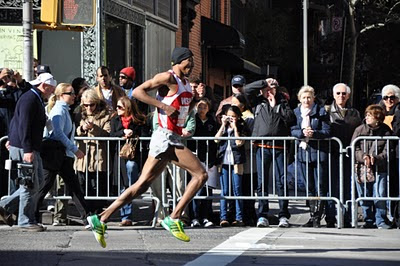 Runner after runner crossed in front of us, strides long and powerful on even the shorter entrants. Their legs were unbelievably toned, one long line of definition extending from hip to ankle with nothing jiggling in between. No two runners were dressed alike, from short black shorts to full pink bodysuits.
Earlier in the morning you catch the stronger athletes, the ones who break away from the pack either on foot, or wheels for the disabled (nobody is excluded from the marathon). People fly past with their names on their shirts so people they’ve never met, like me, can shout out “Go Tony!” or “Come on, Joe!” to support them as they make their way through the marathon’s 26 miles. That’s part of the great fun of the marathon, really—cheering on people who need your support. 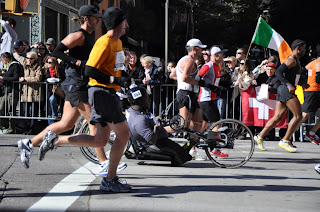 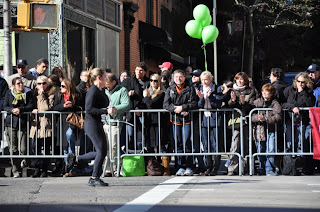 When I first started watching around 11, I saw mostly male runners and while I am not at all averse to this sexy man parade, I was a little disappointed. Where was the womenfolk representation? But then, at around 11:10, I saw the first lady I’d see for another 20-30 minutes at least. I was so proud of this girl for keeping up with, and even surpassing some of, the men. 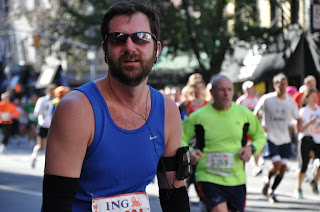 I left and came back later in the afternoon, around 2:30, when you get more joggers and even people in costume—I saw a Minnie Mouse, some woodland creatures, a man in KISS garb, a guy in a bunny mask, and more—and of course that one guy who just walked alongside runners and took a bunch of pictures. Oh, and there was also the guy who juggled while running. 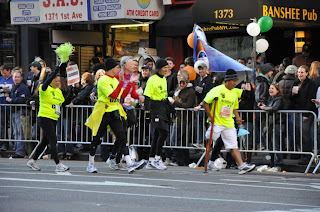 It’s incredible for anyone to do the marathon, though. Person after person ran, or wheeled, or walked, or crutched (yes, a man on crutches!) past me and I just thought to myself, Hero. Hero. All of them.
Posted by miss-manhattan at 11:11 PM No comments: