I meant to post this the week it happened, but got swept up in the the Fashion Week hullaballoo. Forgive me if it's a few weeks late, but I *had* to share this one.

If you had asked me last month what I'd be doing at 5:30am on the morning of Sunday, February 2, I would have said, "Uh, sleeping," then given you a look of death with one of my eyebrows raised. Then I probably would have said something like, "Um, real people don't get up that early on a Sunday for no reason," even though that's completely a generalization and I probably just wanted to be sassy with you.

But "no reason" was not the reason I had in mind. My reason was to see the groundhog. At the Staten Island Zoo.

Thought #1: Isn't the groundhog in Pennsylvania?
Well, yes, there is *a* groundhog in Pennsylvania, but that's Phil. You know, Punxsutawny Phil. But there is another (and I'm sure there are more than just the two) and his name is Chuck. Apparently Chuck is 80% accurate at predicting the climate outcome of the next six weeks, where Phil is only 30%.

Thought #2: Staten Island has a zoo?
Yes. It's where Chuck lives. But I didn't know there was one there either until about four days before I went.

Thought #3: What?
DL posted on Facebook that surely he had some friends crazy enough to go with him. Since he had to for part of his job, he wanted some company. I took it as a personal challenge. Could I and would I do it? 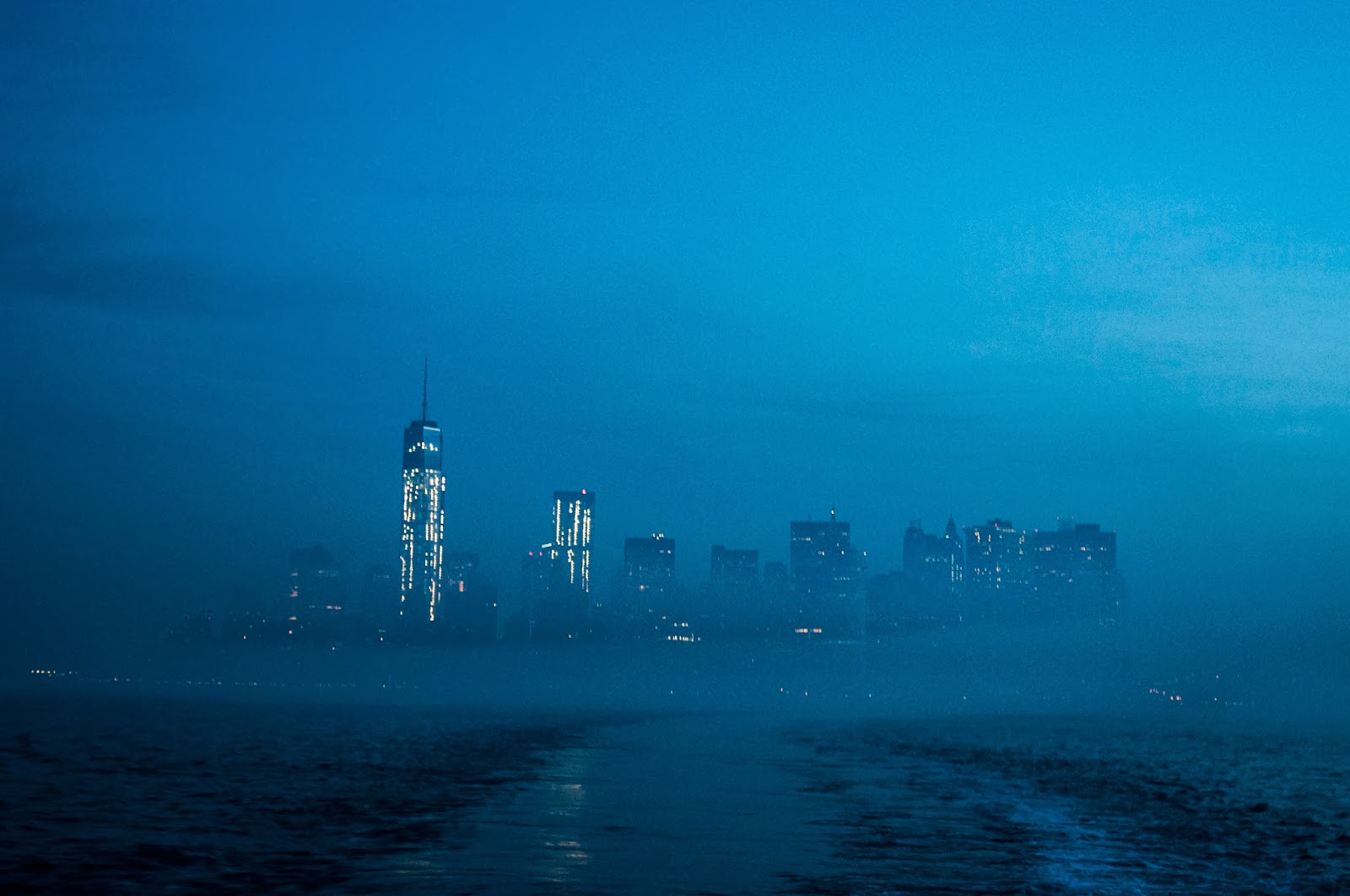 That being said. This story really begins the night before, when RaGo and I stayed at a friend's birthday party until 1:30am. And then we got pizza til about 2am. And then I got home around 2:30am. I didn't so much "sleep" as take a 2.5 hour nap before I "woke up" the next "morning" at 5:30am to reapply my makeup and get my butt down to the Staten Island Ferry at 6am. And I made it to the terminal in plenty of time, though I was sure that if I closed my eyes I would fall asleep and the man who smelled like urine sitting just two seats away from would inexplicably come sit next to me. I could have gotten myself a caffeinated beverage of some kind, but water was all I could really muster--I was also sure, somehow, that if I ate anything I would be ill. "What on earth am I doing??" I kept asking myself. My eyes felt nailed open. 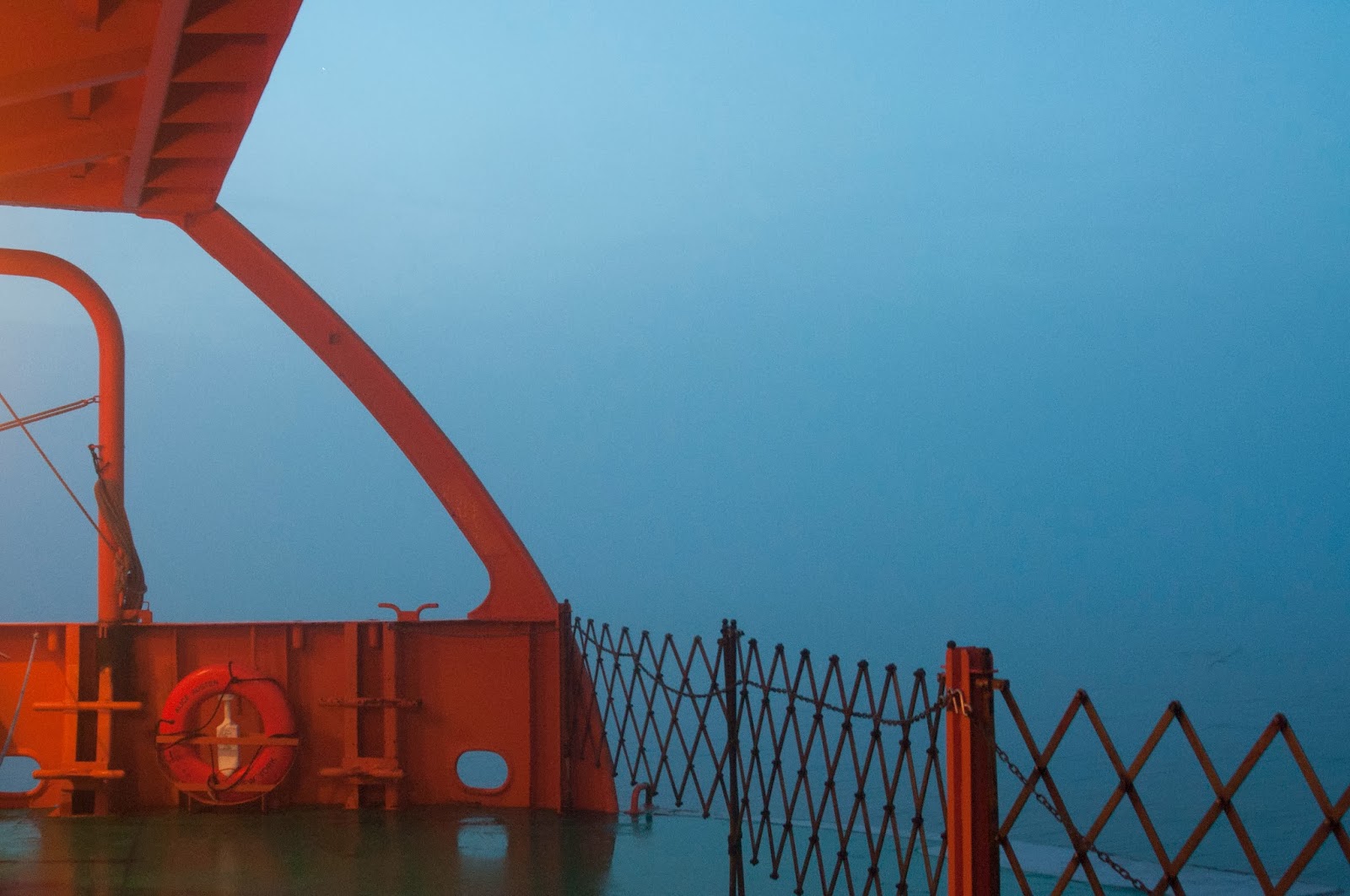 We boarded the ferry, and even though it was damn cold, it was one of the most beautiful sights I've ever seen, and that I will likely ever see again. Floating away from the city cloaked in darkness just as the sun is beginning to rise is an incomparable sight.

Eventually we found ourselves on Staten Island, in a cab on the way to the zoo with a New York Times photographer. There were a bunch of people headed there, apparently, but there were even more when we arrived. Mostly children on parents' shoulders--god bless those parents for getting up so early and getting their children ready for this event, children who are so at the moment appear so excited that this may well be the February equivalent of seeing Santa Claus. Though it was quite chilly, we were given free hot chocolate that tasted vaguely, delightfully of raspberries. 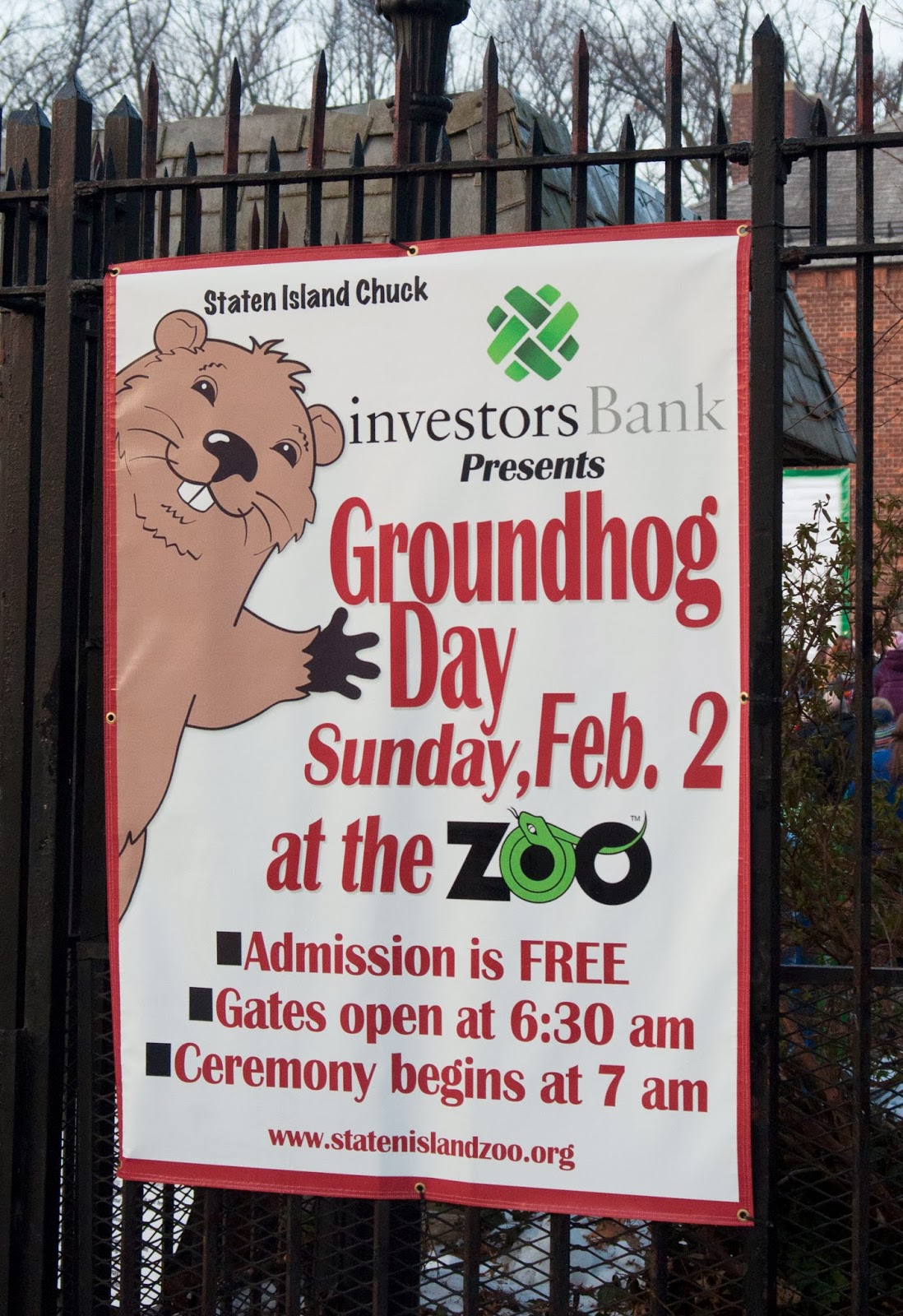 We were far in the back so I couldn't see much, but after much pomp and circumstance and Mayor DiBlasio dropping the poor groundhog, Chuck emerged from his cabin to tell us, much to our dismay, that there would be six more weeks of winter. "He's trying to kill us!" one child shouted, setting a wave of laughter off among the adults in the crowd. I understood his plight!

Once the crowd dissipated, I actually had the chance to see dear old Chuck. It occurred to me that I had never seen a real-live groundhog before, and frankly it looks like a furry mushroom cap. I squealed like a child when I was able to see his trainer feed him what looked like pieces of cheese, though. He'd nibble at them just like a squirrel. A children's band played rousing renditions of songs gone groundhog, like "Groundhog (nee Crocodile) Rock," etc.

Afterward we explored the zoo, which is said to be one of the best small zoos in the country. It had leopards and meerkats and monkeys and giant fish and alligators and bats and llamas and goats and swans and ostriches and I'm writing like this because being at a zoo sometimes reduces me to a wide-eyed 10 year-old and I was so excited! While 10 year-old me was having a blast hanging out with iguanas and toucans, 25 year-old me was wondering how the hell I was still awake. 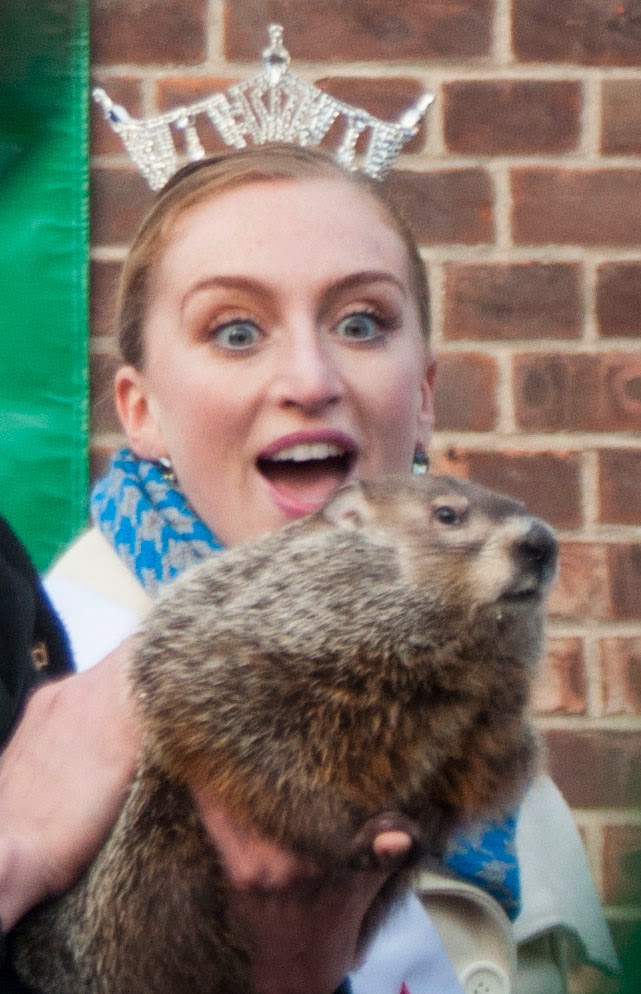 All I could think to myself as we headed back to the ferry was "Challenge Accomplished." We had brunch, I came home, and fell asleep. Would I do it again? Probably not. But even though I didn't know "see a groundhog" was on my bucket list, I certainly crossed it off.

Posted by miss-manhattan at 4:25 PM No comments: