Montenegro, the French Riviera, Palm Springs, and Austin are just a few places on the list of locales I would like to visit. Cleveland was decidedly…not.

I had already visited as a college student in Pittsburgh and gone to The Rock and Roll Hall of Fame. Since it was just two hours west of our campus, my friend J and I had taken a road trip out there to cross it off our senior bucket list. My impression of the city was that it was…clean. There was barely anyone walking around on the weekend we went, hardly a piece of litter strayed from its rightful receptacle. It wasn’t dirty or loud or anything I had come to know from cities in my short 21 years on earth at that point.

The occasion arose, ALiCo’s wedding, for me to return this year, just last week, and I was excited to celebrate my friend’s nuptials. But having exhausted what I thought was the one cool thing in the city, what on earth would I DO there for TWO WHOLE DAYS?

But where, I critiqued myself, was my sense of adventure? Why didn’t I lose the ‘tude and discover what was really great about this city that so many people probably overlooked, including myself? It was, after all, still a city, so there HAD to be something interesting there, besides the Rock Hall.

So I looked up some stuff and lo and behold…Cleveland, I owe you an apology.

Turns out this Midwestern city is nothing to sneeze at, especially not given the proliferation of public art, amazing restaurants, historical architecture, and sweet main streets that made up my trip this time.

EH, her boyfriend S, and I all drove out there from New Jersey, with a stable of ideas of things to do in our back pockets. EH was most excited about the world’s largest rubber stamp, which is not actually rubber but a giant sculpture called ‘Free Stamp’ by Claes Oldenburg and his late wife Coosje van Bruggen. It says ‘free’ on it in mirror image as if it were actually going to be used to stamp something at some point. We were also curious about the West Side Market, a huge indoor food market, and eating a Polish Boy, a treat native to Cleveland that’s a kielbasa in a bun topped with barbecue sauce, fries, and cole slaw. I also discovered that the city has undertaken a huge public art initiative (which I swear I must have said in awe and delight thousands of times as we drove out there, and even while we were still there), so big in fact it is catalogued online. My groans of ‘we’re going to Cleveland’ turned into enthusiastic shrieks of, ‘We’re going to CLEVELAND!!!’

The day of the wedding we had the morning and afternoon to ourselves, so our friends DW and EL joined us, and we all piled into EH’s car and drove the 15 minutes into the city. Everything in Cleveland, we would learn, is 15 minutes from each other. Our first destination was West Side Market.

So, West Side Market is just a market. Partially. One building of it is oodles and oodles of fruit vendors selling everything from cherries to rambutan, from bananas to dragon fruit. The vendors cut up lots of different varieties in hopes of selling their wares, or they’ll offer you different things to taste. It turns out I don’t like papaya, but at least I tried it!

The other building, however, is what we were looking for: food counters by the dozens, with fresh pastries, coffees, crepes, jerky, smoothies, pasties (the pastry kind, not the boobs kind), cheese, pirogies, and RuPaul knows what else. The market was built in 1912 and features over 100 vendors. We strolled through the aisles trying to select what we wanted to eat for breakfast, sampling different wares along the way. I saw apple fritters the size of my face, blue mashed potatoes, infinite kinds of pirogies and seafood and glittery meringues, but ultimately I settled on delicious, juicy homemade lamb jerky from Badstuber and Sons, and a green tea smoothie from Juice Garden. Juice Garden also made an incredible vanilla bean lemonade that was strangely perfectly balanced and easily one of the best things I consumed all day. 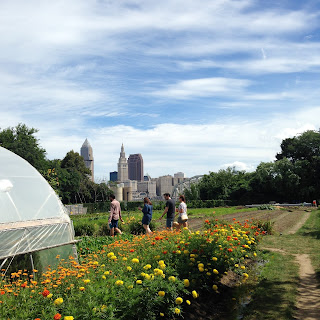 We then went for a stroll up Market Street, having a gander at all of the new restaurants and breweries and cafes in the area. We wandered into Ohio City Farm, an urban farm right in the middle of the city, and walked through on the paths, eyeing all of the curly kale and peppers and tomatoes that are all grown by local farmers. It turns out this particular urban farm, at almost six acres, is one of country’s largest.

The Free Stamp was next, and it really was quite marvelous and giant. I’ve since learned sculpture is one of 44 giant objects designed by Oldenburg and van Bruggen and placed all over the U.S. and the world, the others being things like a set of giant shuttlecocks in Kansas City, an umbrella in Des Moines, and a bent spoon and a cherry in Minneapolis. We took a bunch of pictures like tourists and—despite how much we viciously loathe tourists here in New York—it was incredible fun. I even got a good one of DW dancing in front of it. 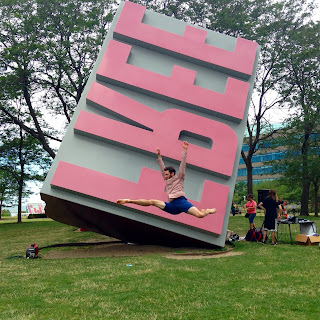 We walked around downtown after that, visiting the gorgeous Victorian shopping arcades with ornate windows and gold ornamentation. We saw more public art, this time featuring bright pink metal sound tubes that you could speak into and from on opposite sides of the park. It was a piece called “Dialogue” by Buffalo, NY-based artists Julia Jamrozik and Coryn Kempster, and was brought to Cleveland by a public art initiative between the Cleveland Public Library and public art non-profit LAND Studio called “See Also,” which looks to bring inspiring artwork from all over to the small park that’s next to the library’s main branch.

Having worked up an appetite, we drove next to Banter, a restaurant that’s been open for about a year and half in Cleveland’s Gordon Square/Detroit-Shoreway neighborhood. They serve sausages and poutine only, and you can select a beverage from their extensive beer, cider, and wine refrigerators in the back. We were seeking a Polish Boy, but also ended up sharing poutines—the original with French fries, gravy, and cheese curds, and the Vladimir, with “frites, braised Ohio lamb stroganoff, mushroom, borscht gravy, curds, and orange zest” for the table. Everything. Was. Amazing. The gravies were thick and flavorful but not too salty, the French fries somehow maintained their crispness despite being under mounds of sauce, the barbecue sauce had hints of nutmeg and was so good EH bought a bottle of it. Interestingly, they didn’t even sell bottles of it, but they put some in a mason jar for her when she said she wanted to buy it. I see they deliver on Uber Eats, but do they deliver to New York???? Actually, I'm lucky they're not here because if they were I would go every day and weigh 1,000 pounds.


So we had a fabulous day, but on top of that every single person we encountered was SO NICE. People were patient and kind and understanding and polite in ways that sometimes I forget people are (and maybe even forget to be myself) living in New York. It’s good to be reminded of this, and it’s good to get out of New York every once in a while. And if you are leaving the city for a minute, might I suggest Cleveland?

Posted by miss-manhattan at 7:42 PM