NP and I sat on the curb eating dumplings and scallion pancakes as we waited for the parade to start. We found a nice empty space, free of women in New York Yankees ensembles who would indignantly tell us no, we could not stand in the space next to them because they had been waiting there for an hour blah blah blah. Our spot was all our own, directly in front of the silver police barricades. The wind seethed through us like ghosts in some Harry Potter movie. I suppose it was fitting because it was Halloween, after all.
I had read about the Village Halloween Parade many times and decided that I would drag my roommate and GD along with me to go see it for our first Halloween in New York. The parade actually began in 1973, when a mask maker and puppeteer would walk from door to door with his children. A year later it was picked up and expanded by the Theater for the New City and a year after that the parade became its own freestanding non-profit organization. The parade is now a huge grassroots event in the West Village, drawing approximately 60,000 costumed participants. It is also broadcast on local New York television station WPXI.
The parade itself begins on Spring Street at 6th Avenue and travels all the way up to 16th Street in Chelsea. We stationed ourselves on the corner of 10th and 6th and had a nice side view of the action, on the street and on the sidewalk behind us. People were decked out as Elizabethan monarchs, superheroes, genitalia (yes, genitalia), biblical figures, Chilean miners, witches, Teletubbies, Elmo, and the list goes on. 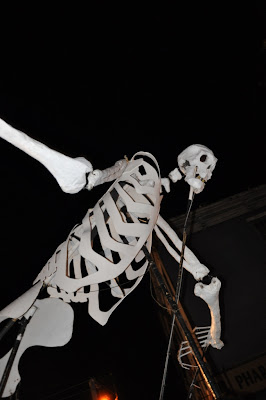 Once the parade started, though, we forgot all about them. Puppets are such a large part of the parade’s history, and the legacy continues today. Not creepy ventriloquist puppets, though—awesome, Lion King on Broadway-type ones, all handmade by artists for the sheer pleasure of participating in the parade. Some of the most famous (and awesome!) puppets in the parade are the 20-year old skeleton puppets, all larger-than-life and not at all creepy. The skeletons are placed at the front of the parade coinciding with the Day of the Dead traditions, not to be “grim expressions of the morbid but rather joyful reminders of all that is vital.”
Beyond the puppets, anyone can be in the parade, from the volunteers who maneuver the puppets to the costumed participants, to bands to dance troupes to vehicles painted in crazy designs. There was a marching band that played Lady Gaga’s “Bad Romance,” a dance troupe from the Broadway Dance Center doing “The Time Warp,” belly dancers, and oh so much more. One of my favorite things about the parade, I think, is that it’s so democratic—it is literally by and for the people of New York, no exclusions.
Once the parade started, it was definitely a neat thing to see, but next year I might try to actually be in it…
Here are some of my favorite costumes from the night:

Posted by miss-manhattan at 9:20 PM